‘Swing your swing’: Jon Rahm reveals the reason for his short backswing 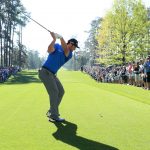 Jon Rahm has one of the shortest backswings in golf.

Every golf swing has some unique flair. Like the grooves and curves of a fingerprint, no two swings are alike. Graceful moves like that of Fred Couples often compete alongside the bizarre gyrations of a Jim Furyk.  It’s part of the beauty of golf — there are lots of different ways to get the ball in the hole.

Jon Rahm’s swing has a unique stamp as well. Although his burly frame and wide hips suggest he’d benefit from a fully rotated backswing for maximal kinetic force, Rahm starts into his downswing seemingly before his backswing even has a chance to gather any serious momentum. No matter, the ball explodes off the clubface.

“Just swing your swing,” Rahm said. “Do what you can do. That’s the best thing.”

Lack of hip flexibility has long been pointed to as the reason for Rahm’s truncated backswing. And while that is partially true (his hip turn in the backswing is just 30 degrees, as opposed to the PGA Tour average of 45 degrees, according to TPI data), he revealed at the Open Championship the underlying reason for his unique swing.

Rahm revealed during his pre-championship presser that he was born with a club foot on his right side. This relatively common birth defect means that a baby is born with a foot that’s “twisted out of shape or position,” and is relatively simple to treat.

For Rahm, his club foot was a bit more severe, and the doctors “pretty much broke every bone in [his] ankle and [he] was casted within 20 minutes of being born from the knee down.” He continued to return to the hospital weekly for treatment and, as a result, has limited mobility in his right ankle.

“I didn’t take a full swing because my right ankle doesn’t have the mobility or stability to take it,” he said. “I learned at a very young age that I’m going to be more efficient at creating power and be consistent from a short swing. If I take a full to parallel, it might create more speed, but I have no stability. My ankle just can’t take it.”

With this limited mobility in his right ankle, Rahm has to find other ways to create power. And he does so with extremely bowed — or laid off — wrists.

“He has an incredible ability to load the wrist joint,” said TPI co-founder Greg Rose in a Youtube video breaking down Rahm’s swing. “He has a lot of power coming from that strong upper body.”

The young Spaniard described his joints as “hypermobile” when getting his wrists in flexion, which is a great way to generate power and get the shaft in position for a shallow angle of attack on the downswing. For Rahm, this move looks exaggerated, but the result is a powerful swing with a much smaller backswing than most.

“It’s little things that I think a lot of people can learn,” Rahm said. “Let your body dictate how you can swing. Simple as that.”

Rahm’s move may not look like the prototypical move for one of the best golfers in the world, but the results can’t be argued.