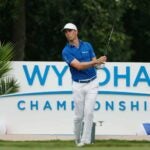 Billy Horschel tees off Thursday at the 2020 Wyndham Championship.

Once the pros sleep off their first 18 holes at Sedgefield Country Club, they’ll return for Friday’s second round at the 2020 Wyndham Championship. You can find full second round tee times at the bottom of this post.

Notable groupings for Wyndham Championship Round 2

The name to look out for on the leaderboard on Friday at the Wyndham is Harold Varner III. Varner fired an 8-under 62 Thursday morning to vault into the early lead. Varner will switch to an afternoon tee time for Round 2, beginning at 1:35 p.m. ET playing alongside Matt Every and Rory Sabbatini.

The star-studded grouping of Brooks Koepka, Justin Rose and Jordan Spieth did not get off to the start they were looking for in the opening round. Spieth was able to salvage an even-par score, but Koepka struggled to a 2-over 72, while Rose was one shot worse. They’ll try to go low on Friday when they tee off at 1:05 p.m. ET.

World No. 6 Webb Simpson, on the other hand, backed up his ranking with a 66 on Thursday. He has a 12:55 p.m. ET tee time with Sungjae Im and Brendon Todd in the second round. Biilly Horschel, who is tied with Simpson at 4-under, tees off at 1:05 p.m. ET alongside Kevin Tway, Billy Horschel and Patton Kizzire.

Check out the full tee times for the second round of the 2020 Wyndham Championship below.