Harold Varner III is playing in the final group on Sunday at the 2019 PGA Championship at Bethpage Black. While diehard golf fans have had Varner on their radar for years, those of you tuning in to see The Great Brooks Koepka Steamroller may wonder who it is playing alongside him. Fear not, comrades: We’re here to help, and Varner is plenty fun to learn more about! Here are 10 things to know about one of the PGA Tour’s most well-liked players.

That’s the same town as LeBron James, who is several years Varner’s senior. It’s partly why Varner has such a tough time picking sides in the greatest basketball player debate.

“Gosh. Jordan’s the GOAT, man. It’s just, I was born in Akron, so I’m indifferent,” he told GOLF.com. “Both of them are great for basketball in their eras.”

Varner proudly reps Gastonia, N.C., where he grew up playing the local municipal course for $100 per summer, which he has lauded as a way to make public golf work for kids. Varner attended Forestview High School, leading his squad to a second-place finish in the state.

Varner graduated from ECU in 2012. In his time as a Pirate, he became the first player in school history to be named Conference USA Player of the Year. Varner won twice and racked up 10 top-fives during his college career.

That’s right — Varner earned his Tour card by less than one thousand dollars. He earned Top 25 honors on the Web.com Tour with a strong 2015 season and gained PGA Tour status for the 2015-16 season. He’s kept that status ever since. 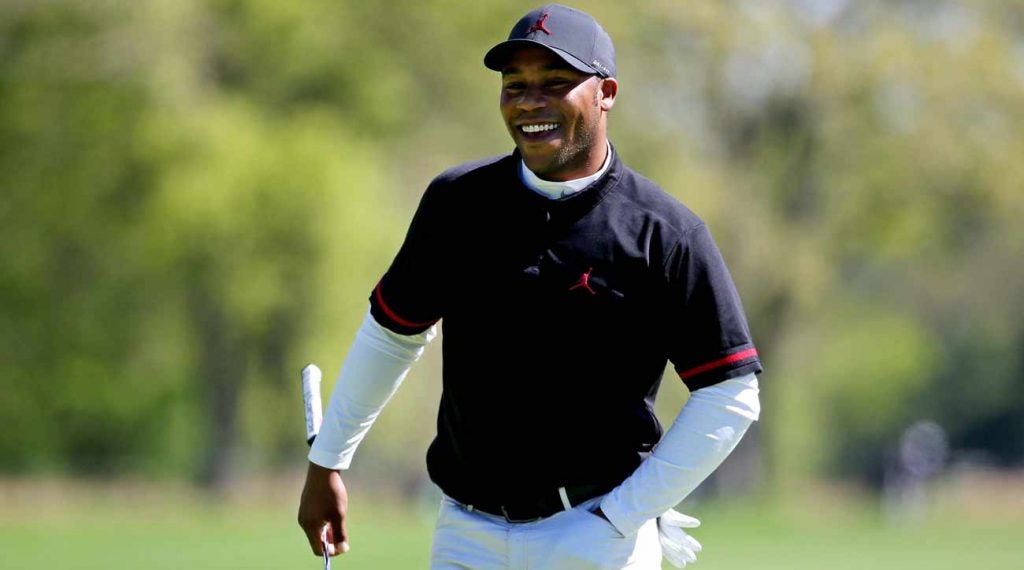 Harold Varner III is in contention on Sunday of the 2019 PGA Championship.
USA Today

5. His biggest win came in Australia.

Thus far, Varner has collected just one win as a pro, which came at the Australian PGA Championship in December 2016. He won by two shots. Varner seems to like the conditions Down Under — he finished solo second at the same event the year before his win.

Varner jumped up golf’s world rankings after his win in Australia, ascending to No. 108 in the world. That is as high as he’s risen. He finished 2018 ranked 157 in the world and currently sits at No. 174 — but that’s likely to change for the better with a strong closing round on Sunday at the PGA Championship.

7. Varner is one of just three African-American players on Tour.

Not my week. Just have to smile. Thanks to everyone involved in making @theplayerschamp an amazing event. See you in Tampa ? #WeHere

8. He has a head-to-toe sponsorship with Jordan Brand.

In 2014, Keegan Bradley became the first golfer to sign with Jordan Brand. In January 2018, Varner became the second; he met with Jordan himself and the two agreed that it would be mutually beneficial for Varner to be the frontman for the brand’s dive into golf. “It was a great opportunity for me to wear Jordan,” Varner said of the deal. “If you pass that up, that wouldn’t be smart.”

9. He’s only made two cuts at majors.

One came via a T66 in the 2016 British Open, while the other came at this week’s 2019 PGA Championship. Varner has a relatively light major history: He’s missed the cut at the three other majors he’s played (two U.S. Opens and a PGA Championship). He has never qualified for the Masters.

10. Varner says he still struggles to focus on the golf course.

Varner was asked on Saturday if focus remains a problem for him. “Always. Always will be,” he said. But he acknowledged that he’s working on blocking out distractions during shots. “I just got to focus for like 30 seconds and I’m doing that really well right now. Yeah, it always will be. I didn’t do a good job in school doing it. Still don’t. But that’s my challenge, that’s what I accept and I’m okay with that.”