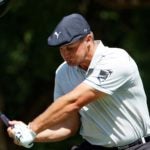 Bryson DeChambeau can do a lot of things, but he can't knock the paint off his ball.

Bryson DeChambeau is on a completely different level when it comes to generating clubhead (and ball) speed. Touching north of 200 mph in the ball speed department, DeChambeau has unleashed multiple drives over 400 yards in the same round. Even fellow playing competitors have started to take notice.

Simply put, DeChambeau is appointment viewing when he has driver in hand. To further highlight DeChambeau’s otherworldly speed, CBS managed to capture one of his tee shots during the opening round of the WGC-FedEx St. Jude Invitational in a super slo-motion video.

“Oh, if I was a golf ball I would need a couple of Advil after that,” said CBS analyst Nick Faldo. “Look at that. That’s what happens to a golf ball, folks, when it gets crushed. It then springs off. That’s the science that goes into this game. Amazing.”

As DeChambeau’s 5.5-degree Cobra SpeedZone driver connects with Bridgestone’s Tour B X ball, debris can be seen exploding off the face just after impact. Many were quick to assume the debris was likely paint coming off the cover. With DeChambeau’s speed, it seemed feasible.

As Elliot Mellow, Bridgestone’s golf ball marketing manager, confirmed to GOLF.com, there’s one problem with the initial hypothesis: the Reactiv cover encasing the Tour B core lacks a layer of paint. The proprietary white urethane cover is injection molded, allowing it to skip the paint step during the production process.

Hoping to replicate the shot at headquarters, Mellow and the team at Bridgestone started looking at new and old high-speed footage (5,000 frames per second) to recreate the exact launch situation. For the moment, they still haven’t been able to find anything that looks remotely close to the high-speed footage in question. But they’re certain it’s not paint.

“Based on what I know right now, we would have to chalk it up to dust or some debris on either the ball or club,” Mellow said. “We are still searching as we always do. It’s definitely an interesting video clip. [We] haven’t heard anything negative from Bryson regarding durability so I don’t think he saw anything on course regarding that.”

So there you have it. Bryson may be country strong, but he’s not strong enough to eviscerate a layer of paint off the cover — at least in this case.

One of the craziest equipment stories of the year happened this week at the U.S. Open

6 must-have pieces of fall wear spotted at the U.S. Open at Winged Foot

Refresh your fall golf wardrobe with these 5 essential pieces