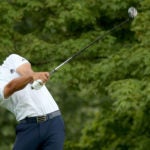 Xander Schauffele hits a tee shot during the Workday Charity Open in July.

Justin Thomas is the favorite to win this week’s PGA Championship.

But he’s not the favorite here.

Call us wise, call us wacky, call us what you will. Thomas is a former PGA Championship winner, the most recent Tour victor and the new world No. 1 — and, of course, a fantastic player. There are many reasons for picking him at Harding Park, and likely those are the same reasons DraftKings put him at the top of their board.

He’s just not the favorite here.

The most popular pick among the GOLF.com staff?

Xander Schauffele, at +1,800. Four of our staffers chose him.

“X has too much talent to not have a major on his resume,” our Jonathan Wall wrote. “He’s come close several times in the past few years, but I think the dam breaks this week in his home state. Schauffele is used to the coastal conditions and how it can affect yardages. This should feel like a home game for him. I LOVE his chances this week.”

Editor’s note: As a bonus for major week, we will reveal our sleeper picks for the PGA Championship on Wednesday.

To-win: Collin Morikawa, +3,500. Not only is Morikawa having a killer season (a win, five top 10s), he also went to school at UC-Berkeley and has played the course before, which gives him a significant advantage over a lot of the players this week. Put it all together, and I think it could be a breakthrough week into the *super* big leagues for the 23-year-old.

Top 10: Webb Simpson, +300. I’ve been betting on Webb a lot, and even though I’ve cashed only once, it was a big one. This week feels like a good time to pick him yet again. He’s a proven winner in San Francisco (hello, 2012 U.S. Open at Olympic), and his results this season speak for themselves (no worse than T12 in three of his past four starts). Keep it goin’, Webb!

To-win: Brooks Koepka, +1,100. I’ve been going up and down the odds page trying to find a name other than Brooks to pick, and I just can’t do it. In his words, he’s “peaking” at the right time once again. The way Brooks came up short to JT, who is the favorite, should leave exactly the right sour taste he needs to use as motivation. I’m already looking forward to the Nike three-peat ad.

Top 10: Phil Mickelson, +750. Coming off a WGC T2 finish, Phil is proving age is just a number. Lefty is going to keep the good times rolling in his home state.

Prop: To be decided by a playoff, yes, +400. We were robbed of a lot of golf this year, so we’re due to get a little extra when it matters the most.

To-win: Rory McIlroy, +1,500. I know, I know. He was my pick to win last week. But I had Rory and JT circled for Harding Park all summer long, and now that it’s here, I somehow decided to NOT pick the guy who is coming off a win and instead go with the guy who won here the last time the Tour was in town. This will be cold and windy and have Open Championship-like conditions in a year where we won’t even have an Open Championship. McIlroy grew up playing golf in the cold and wind and rain. He’s my guy. Again. (Don’t let me down, Rory.)

Top 10: Brooks Koepka, +150. He showed really promising signs last week and didn’t play as badly as it seemed down the stretch. His chip that led to a bogey was inches from being perfect, and his double on 18 was the cause of being a touch too aggressive. It’s a major week, and I learned years ago to stop picking against Brooks for those tournaments.

Prop: To be decided by a playoff, yes, +400. I don’t have much of a scientific explanation here, but I will tell you that since we have waited so long for major championship golf, I think it’s only right we get some scintillating bonus action. Also, good odds.

To-win: Xander Schauffele, +1,800. Xander has been playing really great for the past month or so. He plays great at tough courses, so if Harding Park plays tough, expect Xander to grind his way into contention.

Top 10: Matthew Fitzpatrick, +400. Fitz has been really great at tough courses for about the past year or so. I expect him to hang around and grab a top 10.

Prop: To make the cut, Tiger Woods, no, +250. It’s been a long time since he played great golf. Going to put my money on that.

To-win: Xander Schauffele, +1,800. X has too much talent to not have a major on his resume. He’s come close several times in the past few years, but I think the dam breaks this week in his home state. Schauffele is used to the coastal conditions and how it can affect yardages. This should feel like a home game for him. I LOVE his chances this week.

Top 10: Collin Morikawa, +350. The California kid has been boom or bust recently. I see him boomin’ this week. Playing roughly 20 minutes from where he went to school (Cal Berkeley), I think Morikawa contends in his first PGA Championship.

To-win: Patrick Cantlay, +2,500. Cantlay has contended at a few majors before, but none better than his T3 finish at last year’s PGA Championship. It’s a strange line of logic (and perhaps a bit of an exercise in groupthink), but I do feel there’s something to the theory that a West Coast player will win this week. He might not carry the same gusto as his fellow Californians, but give me the Long Beach-born, UCLA-educated SoCal lifer to find his major championship footing at Harding Park this week.

Top 10: Xander Schauffele, +225. OK, on the off chance the West Coast theory isn’t groupthink, I can’t allow myself to pick away from Xander. His game is rock solid, he’s got the mindset of a gamer, and he’s found himself in contention of seemingly every major event of the past 12 months. A T10 is reasonable any week for Schauffele, and I’d be far from shocked if his name winds up at the very top of the leaderboard when Sunday ends.

To-win: Xander Schauffele, +1,800. I agree with Reilly. The obvious pick is Koepka, who is rounding into form and should have just enough red-ass from last week to get him even more fired up. But I’m greedy and want a slightly bigger payday, so I’ll go with a guy who, with the possible exception of Jon Rahm and maybe Bryson DeChambeau, is the best player high on the odds list without a major. He’s also a Californian, used to the June gloom of San Diego mornings and well prepared to deal with San Francisco’s heavy coastal air. That’s what I’m telling myself, anyway.

To-win: Xander Schauffele, +1,800. Xander is going to win a big one at some point, and this might be the week. He’s in his home state of California, and his game, as they say, is trending. He’s got four top-20 finishes in a row, and if not for a quad last week, he’d have a second WGC title under his belt. Look for the easy-going Californian to make some noise at TPC Harding Park.

Top 10: Tony Finau, +450. Finau cooled off a bit last week, but I still like where his game is at heading into the first major of the year. If he can drop a few putts, he’ll be a good bet to sneak into the top 10.

Prop: Albatross in the tournament, yes, +2,000. I was a few inches away from cashing this same bet last week. When it finally happens, I’ll see you at the top of the leaderboard.

To-win: Adam Scott, +7,000. Psst … Adam Scott is a 2020 winner (at Riv) and the ninth-ranked player in the world, and yet there are still 24 players in the PGA field getting better odds. I believe that makes him what the gambling sharpies call a “value” pick, which is precisely what I need to crawl out of my slump. Will Scotty be sharp in his first tourney since the restart? Hard to know. But he’s been grinding away on his game for two weeks in North Carolina with his swing coach and assorted others, a la Rocky training for Drago in the wilds of Russia. I like his style — and his chances.

Top 10: Matt Fitzpatrick, +400. Kid’s on a heater. Third at Memorial; T-6 in Memphis. Could easily win at Harding. Take this one to the bank.

Prop: Top American player, Brooks Koepka, +750. Only a fool bets against Brooks in the majors. He won’t win his third straight PGA this week, but he will come awfully close.

To-win: Viktor Hovland, +4,500. Some will say he’s too inexperienced to win a major. But, without fans, this isn’t a normal major. He’s also one of the most consistent guys out there, so I wouldn’t be shocked at all to see a Viktor victory in the year’s first major.

Top 10: Collin Morikawa, +750. I’m taking Morikawa to finish in the top 10 for essentially all the same reasons I took Hovland to win. If my thinking is flawed, then I’m going to lose a lot of money.

To-win: Collin Morikawa, +3,500. I want, like, four players. Ugh. Brooks. Because. Rory has won here before. Xander is a solid ball-striker and played well last week. I’m going Morikawa. He knows the course and the area – he played his college golf at Cal – he can hit every shot, he’s won since the restart – and the number is good.

Top 10: Brendon Todd, +1,100. He’s in form, he’s had an extremely impressive season, and he’s sort of a Webb Simpson-style player himself, with a trusty fade that ranks him third in driving accuracy.

Prop: Group C winner, Matthew Fitzpatrick, +350. One of the best putters on Tour who thrives on courses that don’t demand distance, but rather clever management from tee to green. A nice run of good results makes him all the more appealing.

To-win: Bryson DeChambeau, +1,500. Sorry, Bryson. Up until I made this pick, I think you had a better chance to win than anyone!

Top 10: Tiger Woods, +335. We could get off-Tiger, in which case he’ll miss the cut or never become a factor. But if we get on-Tiger, which I hope we do, I’d expect him to get into contention and stay there.

Are lawn-treatment services worth hiring? Here's what a golf-course superintendent thinks

GOLF Spring/Summer 2021 Style Guide: The best men's and women's shirts for your game

AT&T Byron Nelson picks to win: Who a professional gambler is betting his money on