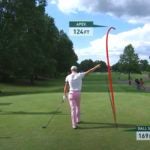 Justin Thomas is a serial winner. Has been since his days in junior golf, and is today on the PGA Tour. The 27-year-old’s victory at the WGC-FedEx St. Jude Invitational marks his 13th PGA Tour title and launched him to World No. 1 once again.

His performance was rife with fantastic shots from tee-to-green, but the lasting moment for me came on JT’s 72nd hole, a 450 yard par-4 where he secured the tournament with one bad shot, one decent shoot, a very good shot, and a tap in. The highlights are fun to watch, but it’s often the lowlights, like this specific moment, that are what recreational golfers can learn the most from, and mark the sign of a truly elite player like JT.

It started on the tee. JT pulled a 3-wood and hit one of the worst shots of the day — something resembling a block-fade. With water and OB left, and a slim two-shot lead in the tournament, the reason for the miss was more mental than technical: Good old fashioned nerves.

“I saw that I had a two-shot lead, hence the reason I hit it right of the universe,” Thomas said afterwards. “It was not going left, I promise you that.”

There are two things worth pointing out here.

The first is what JT pointed out himself in the quote above: He immediately identified the worst-case scenario. There is exactly one shot on this tee that will lose you the tournament, and it’s missing left. Hit the ball literally anywhere but left — even if it’s a million yards to the right — and you’re still in with a chance of winning the tournament. It’s classic winning ugly, golf-is-a-game-of-misses stuff. JT’s shot wasn’t a good one, but he doesn’t care. It was exactly the right kind of bad shot (which in some ways makes it a great shot).

The second decision point was his club selection. The most common play here was to take a driver, blast it past those bunkers with a draw. Indeed, some would have probably recommended JT hit driver here too, considering he was due to finish earlier than the others. Hit a good shot, and the tournament is effectively over.

But hitting that shot also comes with a potential cost: It brings more water into play. It brings OB long into play, and maybe even the water all the way to the right. If JT hit a similar shot to the one he did on the 16th hole or the one he did eventually with his 3-wood, he would’ve been somewhere between super blocked-out and OB.

But JT really wasn’t interested in playing the risk-reward game. By pulling back and hitting 3-wood, he effectively made his margin of error huge: Anywhere but left. It all but guaranteed he could hit an atrocious shot and still be fine, which is pretty much exactly what happened.

Fast-forward to the next shot. JT actually got a little unlucky with the lie — the ball was way below his feet — but he had a pretty unencumbered view of the green.

Once again, JT identified the absolute no-go zone, which was anything left. The green is obviously the goal, but the best worst-case scenario is long left. The pin is tucked front left, so long right, where the grass is mowed low, gives you lots of green to work with.

But what’s interesting is that JT isn’t banking on the ball going right. His clubface, at least from what I can tell, is aiming pretty much at that sponsor’s structure, which is in the middle of the green.

His eventual shot seemed to come out a little more right than he expected, but still ended in the aforementioned chipping area.

The ball settled about pin high 30 yards right of the green, with a nice lie and a ton of green to work with. If somebody told you to place your ball in the easiest place to get up-and-down, you’d be a fool not to place it here.

JT’s shot, in reality, was much shorter than 30 yards, because all he needed to do was hit his ball about a yard onto the green. JT being JT, executed it perfectly, lofting the ball into the perfect spot and letting it trickle down into tap-in range.

“That chip shot on 18 was pretty sick.” he said. “It’s not a hard shot to hit inside 10 feet, but it’s pretty hard to hit as close as I did under the circumstances and the grain and the nerves. I was pretty proud of that one.”

JT’s par won him the day, and while his previous 17 holes featured a host of impressive shots, his drive and approach wouldn’t fall into that category. And therein lies the lesson: JT’s decision on each of his first two shots had only one priority — anywhere but left. It’s something the rest of us can learn from. Step up to a hole, identify the one area of the hole where you absolutely can’t go, and play the hole around it.

Golf remains a game of misses.