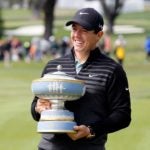 TPC Harding Park is the belle of the ball this week in the golf world. The San Francisco muni is set to host its first major championship and first Tour event since the 2015 WGC-Match Play. Can we pull some knowledge from how that event played out? We will certainly try.

For starters, the course will definitely be set up differently. Course operators began narrowing the fairways as early as last summer. What is normally a pretty wide-open ballpark will play much different if players are desperate to hit the fairways. The rough will also be grown to a greater length, making the accuracy of those tee shots even more important.

When the Match Play was held in the spring of 2015, the conditions were chilly by Tour standards, which might just always be the case for San Francisco golf, but players were raving about the setup. “It’s a great golf course,” Gary Woodland said. “The layout is awesome. It was in phenomenal shape. It’s a great match play golf course because there are a lot of birdies out there.”

You can’t blame Woodland for being complimentary. His game matched up well that week, leading him to a spot in the finals opposite Rory McIlroy. Woodland won a series of tight matches while McIlroy blitzed the likes of Jason Dufner (5 and 4) and Hideki Matsuyama (6 and 5). This happens in most match play events, where one player just isn’t feeling it that round and is bounced early.

McIlroy needed 20 holes to fend off Billy Horschel to advance to the knockout stage and 22 holes to beat Paul Casey in the round of 8. In the end, McIlroy finished Woodland off 4 and 2 for his 10th PGA Tour victory.

“I never played Harding Park before …” McIlroy said. “But I really, as soon as I played the course, I liked it. It’s a fair test of golf. You get rewarded for good shots. It suited my eye. I like big trees that frame holes and you’ve got a lot of definition to work the ball off stuff. I really enjoyed the golf course this week and enjoyed it as a whole.”

As a result of his current standing as the No. 2 player in the world, and his history at the track, McIlroy is the betting favorite to win his third career PGA Championship.