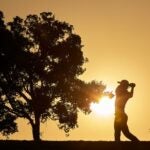 “Titleist 2,” Josh said. “Yeah, I don’t think this is mine. What ball you playing?

Josh had hit my ball from the fairway. I had hit his. We didn’t hit either Josh’s Titleist 2 or my Titleist 3 again. We sheepishly laughed, dropped both balls to the green, darted to our separate carts, doused our hands in hand sanitizer, put ourselves down for 4’s and drove off to the next hole.

That was my eighth hole of the year.

That was my eighth hole of the Covid year.

We made two ’Rona pars, the people behind us found two Titleists right smack dab on the middle of the green, and we stayed safe. But as the calendar turns to 2021 and we turn our hopes toward the vaccine and the end of the pandemic, here’s to hanging onto perfectly good golf balls, one of 20 reasons why golf may have been great in ’20, but it could be even greater in ’21.

Those lost balls? Hopefully yours again

Should you and I, when it’s safe again, find a golf ball in the woods, or under a leaf, or, shoot, on the green, it’s yours again, (somewhat) worry-free.

Speaking of, this brings up one of my funnier stories of the year.

Back in March, I wrote, “Golf and the coronavirus: How to play with confidence, according to an expert.” The second rule — “How you should handle your golf balls” — led to this quote from my infectious disease source: “If you’re picking up random golf balls, don’t touch your mouth. Maybe leave it behind.” Except the original quote didn’t have the word “golf” in it — which led to a text asking if I could add that in, as the source’s co-workers had printed the story out and put it on a bulletin board.

One to a cart? Hopefully it’s two again

I rode for most of the summer. And except for one round with my wife and one round with a friend with a giant piece of clear plastic between us, I rode solo. No conversations. No catching up. No jokes. Just me and my thoughts (scary!), and my friends in socially-distanced carts yards and yards away. Hopefully, when it’s safe again, we ride again.

I played somewhere around 25 rounds this year, at just about a different course each time. I saw two beer carts. Two! No Miller Lite. No Bud Light. No Coors Light. No craft beer. No cocktails. No oasis on wheels. Of course, maybe this is why I played better. But, hopefully, when it’s safe again, and I see a cart far off into the hazy horizon, I’ll know it won’t be just a maintenance wagon.

Let’s shake on it

I like the fist bump. And I have to admit: I actually like the putter-tap move to your playing partners on 18. Has a sort of “Lord of the Rings” sword vibe to it. (Nerd!) But, when it’s safe, I’m a handshake guy. Remove the cap, walk over, look the other player in the eye and say, “Good round,” as if you have just climbed Mount Doom or something. (Nerd!)

What’s on the menu?

I’ve had a cheeseburger and fries after a round at Bethpage State Park in New York. At Shadow Creek In Vegas. And at Currie Park in Wisconsin. And at Dodge Riverside in Council Bluffs, Iowa. Other courses, too. I’m a cheeseburger-and-fries-in-the-clubhouse golfer. You add up the scorecard. You ask to get the game on. You stretch your legs out. You eat. This year, only a few of the courses I played at had food, and the ones that did served it in a styrofoam box. It filled me up, but I was hungry for more. When it’s safe, I’ll be eating a burger, medium well, with swiss or american cheese, lettuce, ketchup and pickles; hold the tomato.

I’ve had a tap beer after a round at Bethpage State Park in New York. At Shadow Creek In Vegas. And at Currie Park in Wisconsin. And at Dodge Riverside in Council Bluffs, Iowa. Other courses, too. Gotta wash that cheeseburger down, right? A glass is class. A Guinness just doesn’t seem right without it. Plastic cups are for college kegs.

(And hey, when it is safe and we do eat and drink and saddle up at the bar, tip. These staffs have been hit. Hard.)

Back to my first round of 2020. I wore a mask up until I teed off on 1, and I put it back on when I putted out on 18. In between, my mask was in my front-right shorts pocket, where, occasionally throughout the round, I’d thoughtlessly drop in a muddy tee right next to it. I was protected against Covid, but not against my own stupidity. When it’s safe, I’ll smile, and you’ll be able to see it.

So fresh and so clean

Sometime during the summer, while paying for a soda at the turn, I turned to the hand-sanitizer dispenser, pressed it and properly cleaned not just my hands, but my forearms, my shirt and my shorts. That bogey on 9 had pumped me up to pump down. Like our swings, it’s all about tempo. In 2021, we’ll be the Adam Scotts of hand sanitation.

My last round of the year was just as Covid-awkward as the first. On the par-3 3rd hole, while we were waiting for the group ahead of us to finish up, one of the players we were paired up with had something to say to me. He began talking. And walking. Closer. Closer. The prescribed 6 feet became 5, then 4, then 3. Then I backed away. But he kept coming. It was a tee box tango. When it’s safe, hopefully we can leave the dancing to Miguel Angel Jimenez.

Ryder Cup is back

In 2012, before his tee shot on 1 during his Sunday singles match at the Ryder Cup at Medinah, Bubba Watson asked for noise from the crowd, the crowd answered, and he swung away. The event is as much about the fans as it is the golf. It made sense, then, to move it from ’20 to ’21. When the American fans can cheer DJ and JT and boo Rory, and the European fans can cheer for Tommy-Tommy-Fleet-wood, and boo Captain America.

The Open Championship is back

Three men’s major championships were played in 2020. One was not. The oldest one. The Open Championship was canceled last April, but it will resume in July. Fans on one side of the pond will celebrate a champion over dinner, and fans on the other side will celebrate over breakfast.

Fans will be back

The other day, I rewatched Justin Thomas and Collin Morikawa’s back-to-back bombs on 18 at the Workday. I relistened, too. There were a few claps. A few shouts, not including Thomas’. You can actually hear someone whistle. The roars would have been deafening. Instead, only the silence was. Fans should gradually return in 2021. So should the noise.

Patrons will be back

Maybe it was just me, but the Masters without its patrons this year was like a pimento cheese sandwich without all its pimentos. It was the Masters, yes, but it was missing some zing. Though Augusta may ultimately go without a gallery in 2021, too, here’s to hearing the roars again.

I played my first golf tournament at Currie Park in Milwaukee. (At the time, I had been playing for about three months, hit my 5-wood about 150 yards and shot 108. Charlie Woods, I was not.) I broke 40 for nine holes for the first time at Greenfield Park in Milwaukee. (Par for the front nine is 34, but a 39 is a 39.) I played golf with my dad the one and only time at Whitnall Park in Milwaukee. (And we cheated, too!) I was born in Milwaukee. I lived there for the first 22 years of my life. I’ve come back home at least once a year ever since. The streak hopefully starts anew in 2021.

You all have a Matt. The friend you’ve played golf with since high school. The friend who needles you when he outdrives you by 50 yards, and who you needle right back because, even though the drive went 50 yards farther, it also went 100 yards to the right. The friend you played golf with the day before his wedding, and the friend who played with you the day of your wedding. In 2021, Matt and I are hopefully going to play again. He just texted me the other day about a deal he found at Fire Ridge in Grafton, Wis. Book it.

You all have an Ethan. The college friend who didn’t play golf before you met him, whom you convinced the sport did have sun and beer so it couldn’t be that bad, and who would end planning a buddies’ trip to Bethpage State Park as your best man’s gift. In 2021, Ethan and I are hopefully going to play again. The sweet thing is, Ethan and Matt are friends. Add in our other friend Matt, and I have my foursome. Book it.

I’m going to play with my nephew again

I saved this for last. It’s the most important. I have a small family, and I was really the only one who played golf. Until Mason. My wife and I have played nine holes at Hansen Park in Milwaukee with our nephew. We’ve played 18 at Hansen with him. We’ve played nine at Eagle Run in Omaha with him. And we’ve eaten at Culver’s after every round. He’s turning 13 in January. I have only a few years left where I’m still outdriving him. This hopefully will be one of them.