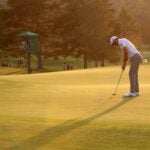 This year's November Masters allowed the lucky few there to get inside the minds and lives of pros like winner Dustin Johnson.

Someday, you may tell the little ones all about the “November Masters,” if you were there. The world was in the throes of a pandemic, to say nothing of our national political discord and all it has wrought. Augusta National, in Masters week, had never been more of an oasis. The unencumbered views of the golfers, all through the week, let you fall into their lives — their shots, their thinking, their traumas — as never before.

This was your 24th Masters with a press credential. You’ve been to Augusta National as a guest. One year you caddied in the tournament. But you’ve never felt more connected to the proceedings than you did in this November Masters, this 2020 Masters.

In the Press Building, you have food, water, internet. But out on the course, you’re in a vacuum. It’s like listening to baseball on the radio — you fill in the blanks on your own. You think for yourself. When you can see every shot, you do more of that. Now you’re caddying for Dustin Johnson. Now you are Dustin Johnson.

You’re in the middle of 11 fairway. The only way you’re going to not win this Masters is by losing balls between here and the scorer’s room. In the pond to the left of 11 green. In the creek in front of the 12th and the 13th greens. In the ponds short and over 15. Keep your ball dry, win valuable cash and prizes.

And now you come to 15. The hole where F. Molinari arrived on Sunday still tied for the lead last year, before various weird things transpired and his tournament essentially ended. You hit your tee shot long and left and there’s a tall tree between you and the green. You’re going to lay up. You’re going to hood a 6-iron, punch something low and running, pitch your third on, make your 5. You’re standing practically on top of the ball. There’s no gallery rope. It’s so obvious, what you should do. But, in fact, you are not Dustin Johnson, who surely did not think about Hogan on 11, Nicklaus on 12, Zach Johnson on 13, the Italian Detective on 15. Johnson is doing just fine without your mental telepathy.

He hits what looks like a 9-iron for his second shot on 15, high and perfect and close to full. His next shot is stunning in its rhythmic perfection. The putt for 4 is nothing but net.

Still, for a while there, in this sanctum of golf, in the bubble within the bubble, you were playing Dustin Johnson’s shots before he did. You were living it as never before.