Dustin Johnson appears on GameDay, but did you see that ornament? 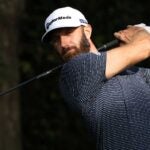 Dustin Johnson hits his tee shot on the 2nd hole during the final round of last month's Masters.

Dustin Johnson, as we’ve seen over the years, is as serene as his golf swing. Short answers. A smile. Simplicity. When the newest Masters champ appeared on ESPN’s College GameDay on Saturday morning, it was Dustin Johnson at his Dustin Johnson-iest. The college football preview show was in Conway, S.C., ahead of Saturday night’s Coastal Carolina-BYU game, and Johnson, one of Coastal’s more famous alums, would be making guest picks in what appeared to be his living room. When the camera light turned on, Johnson was wearing his winner’s green jacket and a perfectly knotted, green-and-white Masters tie.

“And he shows up with that green jacket,” host Rece Davis said at the end of Johnson’s introduction. “Dustin, what’s that like to be able to wear that thing around?”

Then came the picks.

“I’m going to go with Hawaii. They’re at home.”

But then, every once in a while, you get a little bit more. The Dustin Johnson this November on the 18th green at Augusta National, where the victory meant so much to the man that he could barely form a sentence. The curtain peels back ever so slightly.

The picks weren’t all dry.

DJ knew Indiana quarterback Michael Penix Jr. tore his ACL last week and is out for the rest of the season?

“I’m going to have to go with Wisconsin. I think if Pennix was playing that Indiana might win it, but I think that was a tough loss for them last week, and Wisconsin will get it done.”

The humor was very dry.

“Well, my manager went to Texas, so I’m going to have to pick Texas. If not, he’s not going to get me any more good deals.”

We also saw an ornament.

Behind Johnson for the 15 or so minutes was a Christmas tree. Four ornaments were in sight. A reindeer. Two traditional ones.

And a green-and-white camper one over his left shoulder. Families sometimes decorate the tree with items that mean a little something more. Johnson, or maybe fiancee Paulina Gretzky, or maybe their boys, Tatum and River, at some point, bought a camper ornament.

As Johnson was on his way to winning the Masters, Rory McIlroy was asked if there’s anything in his fellow pro’s personality that maybe those on the outside don’t know. “He’s smarter than you think,” McIlroy said.

An ornament said as much.

UCLA at Arizona State: “I think it’s a tough one. I’m going to go with UCLA.”

Texas at Kansas State: “Well, my manager went to Texas, so I’m going to have to pick Texas. If not, he’s not going to get me any more good deals.”

Clemson at Virginia Tech: “Well, I grew up in Columbia so I’ve always been a Gamecock fan, but I hate to do it – I’m going to have to pick Clemson. I think they’re pretty good and I think they’ll be competing for the championship.”

Alabama at LSU: Alabama, for sure. I think they’re just too good on both sides of the ball. They’re the best team in the country so Alabama wins.

Texas A&M at Auburn: “I’m going to go with the Aggies. I think they’re the better team.”

Indiana at Wisconsin: “I’m going to have to go with Wisconsin. I think if Pennix was playing that Indiana might win it, but I think that was a tough loss for them last week, and Wisconsin will get it done.

BYU at Coastal Carolina: “I’m going to have to pick Coastal, for sure. That’s my alma mater. I think it’s great what BYU did. I thank them for coming to play Coastal. I think it’s great for the school. I’m really looking forward to watching the game. Hopefully it can be close and Coastal will win it.”