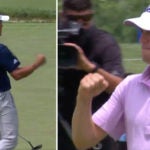 Collin Morikawa and Justin Thomas had quite the start to their playoff.

First there was the putt to get to the playoff. There was Collin Morikawa, facing down a two-footer, even shorter than the one he lipped out just two weeks before at the Charles Schwab Challenge.

This time, it lipped in.

But that was just the appetizer. Thomas had just made bogey at 18 to fall back to 19-under, which is exactly where Morikawa’s par putt left him at the end of regulation.

The duo headed back to the 18th tee for the first playoff hole, where they each found trouble. Morikawa’s tee shot ended up in the fairway bunker, while Thomas’ sailed wide right into the rough. Both found the green, but hardly with close birdie tries — Thomas was just over 50 feet away and Morikawa about half that distance, at 24 feet.

With Rickie Fowler and a couple dozen volunteers and media members looking on, Thomas poured in his birdie prayer, punctuating the putt with a guttural scream that pierced the quiet air.

All Morikawa needed to do to extend the event was find the bottom of the cup on a touchy downhiller. So he did this: