Who our staff members think will win the Charles Schwab Challenge 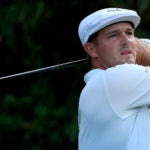 Bryson DeChambeau is among the favorites at the Charles Schwab Challenge.

Bryson DeChambeau muscled up last year, starting at 195 pounds and rising to 220 at the Shriners Hospitals for Children Open last fall. He muscled up, too, over the PGA Tour’s three-month hiatus due to the coronavirus, telling his social media followers in late April that he was at 235 — and had goals one day to get 270.

As the Tour resumes play this Thursday at the Charles Schwab Challenge, GOLF.com is resuming its picks to win. And like DeChambeau, our prognostication platform is bigger than ever.

Fourteen members of our staff will make three $100 bets — to win, top 10 and a prop bet of choice — for each tournament from the Charles Schwab Challenge through the Masters in November. Each member starts with $4,000, and the odds will come from the DraftKings website. The money is fake. The reward is real.

Someone will win this game — we think?! — and that person will play a round of golf when it’s all said and done. Someone will finish last in this game, and that poor sap is on the bag for the winner.

Our primary goal, though, is to help you with your own weekly picks, whether those are for a low-stakes office fantasy league or (legal!) big-bucks bets with a sportsbook.

For the Schwab, DeChambeau received the most to-win selections with the three picks. Ten total players were picked in all.

“He’s been working hard on his game during this time off, and I feel like his competitiveness is about to have a field day,” one of the pickers, Ashley Mayo, wrote.

To-win: Justin Thomas, +1,650. Lights out before the hiatus. No reason to believe this Colonial first-timer won’t be lights out after.

Top 10: Kevin Kisner, +750. Putts like a dream, plus three top 10s over his past five Colonial starts; also looking to avenge his recent loss to Barstool podcasters.

To-win: Webb Simpson, +2,200. Colonial is a ball-striker’s course and one of the few places on Tour where bombers don’t have a big advantage. Webb is always steady, and I don’t see him showing much rust.

Top 10: Patrick Reed, +300. This one is nearly a home game, and I can’t imagine a grinder like Reed took too much time off over the past few months.

Prop: Rory McIlroy to make the cut, -670. Hey, it’s our first week doing this betting exercise. I need at least one lock. This is that.

To-win: Jordan Spieth, +4600. In a field without any momentum, home-field advantage feels like it could be a differentiating factor.

Top 10: Tony Finau, +900. Finished second at Colonial last year — great value for someone who was 10th in strokes gained before the shutdown.

Prop: Rickie Fowler, T-5 American, +500. He carried Matthew Wolff at Seminole a few weeks back, so rust won’t be a factor here.

To-win: Jason Day, +6,600. Those numbers that surfaced last week about J-Day’s peak are stuck in my head, and after a full reset, this number seems way high.

Prop: Top past champion, Jordan Spieth, +500. Who needed a reset harder than Spieth? We’ll stick with a hometown theme and grab some value on the Golden Boy. Buy low!

To-win: Bryson DeChambeau, +2,500. Bryson was roaring before the break — first in driving distance; fourth in strokes gained: tee-to-green; and fifth in scoring average. He lives in Texas now, which may give him something of a home-field advantage, and unlike other players, we know that Bryson worked harder than ever during the impromptu offseason.

Top 10: Rory McIlroy, +110. The odds aren’t very lucrative, but that’s because it’s practically a lock. Rory has top 10’d in 20 of his past 25 PGA Tour events and is six for six this season. Just take your money and run.

Prop: Top past champion, Jordan Spieth, +500. Let’s take a flier on Jordan Spieth. He’s got two top 10s this season, and the mid-season offseason may have helped him through some of the swing issues he’s been working through with his coach. Maybe a bit of time off, and a return to the site of a former victory in his home state, will help get the good vibes rolling.

To-win: Bryson DeChambeau, +2,500. In the absence of any clues relating to anyone’s current form, I based this week’s picks on players with Texas ties. DeChambeau, the current world No. 13, grew up in California but went to college at SMU, a mere 40 miles away from Colonial. So, naturally, he will win this week.

Top 10: Sergio Garcia, +550. Garcia will top 10 not only because he’s won a few titles in the Lone Star State (including one at Colonial way back when) but because he’s now also an honorary Texan, after marrying his wife, Angela, a native Texan.

Prop: To be decided by a playoff, no, -670. With DeChambeau claiming the title by at least two shots, a playoff is simply not happening this year.

To-win: Bryson DeChambeau, +2,500. He’s been working hard on his game during this time off, and I feel like his competitiveness is about to have a field day.

Top 10: Harold Varner, +1,400. He’s playing for so much more that himself at the moment. I think he’ll really deliver this week.

Prop: Winning margin of two strokes, +350. I think there will be a handful of people in this thing with a few holes left, but the winner (hello, Bryson!) will really step on the pedal to finish it off in style.

To-win: Scottie Scheffler, +3,500. The PGA Tour Rookie of the Year front-runner (yes, even ahead of Viktor Hovland) should be comfortable around Colonial, as he’s from the DFW metroplex and won’t have to stress over the travel that many players face the first week back. Plus he makes birdies in bunches.

Top 10: Jordan Spieth, +450. I’ll give some more love to another fellow Texas Longhorn this week. Again, being from the DFW area will be a huge plus for Spieth. His struggles have been well documented, but maybe the time away from golf will have served his game well.

To-win: Rickie Fowler, +3,500. This is both a big and unique event. I wanted someone who’s up to that task. I also wanted someone who’s played a lot during the hiatus. Not only did Fowler play in one of the charity events, he beat friend Justin Thomas — left-handed. Speaking of, either him, JT or Jordan Spieth is going to start fast — they’re friends and they’re all playing together the first two days.

Top 10: Zac Blair, +3,300. He’s arguably played the most during the break, at least if you judge by Instagram posts.

To-win: Brooks Koepka, +2,500. When the bright lights are on, Koepka turns his game on. While this might not be a major, the field is stacked and all eyes will be on the PGA Tour this weekend. I expect Brooks to do what Brooks does and show up on a big stage.

Top 10: Jordan Spieth, +450. I have faith that Spieth is turning the corner, and a top 10 this week in his home state will solidify just that.

Prop: To be decided by a playoff, yes, +400. So much golf was taken away from us in 2020 that the golf gods are sure to give us a playoff this week.

Prop: To be decided by a playoff, yes, +400. A great field, with everyone chomping at the bit. This will be a dogfight down to the end.

To-win: Scottie Scheffler, +3,500. He lives down the road in Dallas, and he’s a lock to win sometime this year, in my opinion. Might as well win the first event back.

Prop: Winner to bogey 72nd hole, yes, +800. I’m envisioning the leader (Scheffler) coming to the 72nd hole with a bit of a cushion, playing away from the water on the left for his approach, and failing to get up and down for par. He makes bogey but wins by one. It seems more likely than 8-1 odds, so I’m comfortable with the value on this bet.

To-win: Webb Simpson, +2,200. Has finished outside the top 10 just once in five starts this season. Thrives on courses where strong ball-striking is rewarded.

Top 10: Sungjae Im, +350. Could argue no one was playing better than Im before the season was put on hold.

Prop: Winner to play in final first tee grouping in round 4, no, +170. Rust will be a factor as players navigate a tight course without fans. I think someone posts a number and wins from the clubhouse.

To-win: Patrick Reed, +2,800. Guy goes about his business, is one of the best ball strikers out there and has quietly become very consistent. Wouldn’t be shocked if he won again.

Top 10: Jordan Spieth, +450. Jordan’s history at Colonial is unparalleled among current players, even though it’s added up to just one victory. This is a heart play, though. I just want the guy to succeed.

Prop: Scottie Scheffler, leader after round 1, +4,500. Scheffler is on the short list of contenders for Rookie of the Year, and he quietly played a bunch of solid golf during the coronavirus shutdown. Worth a bet here!