Houston Open expert picks: Who our staff thinks will win 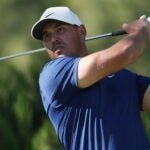 Harold Varner III shot 2-under 69. Then 9-over 80. He wouldn’t make the cut at last week’s Bermuda Championship. He wouldn’t cash.

“. @HV3_Golf on a day where 64 year old Fred Funk turned back time & made the cut you shoot 80… can you let me know what your next tournament is;so I can fade you to recoup my Bermuda fund$.. I assume Augusta didn’t invite you, but let me kno plz? #thanks #BermudaChampionship,” the user tweeted at Varner.

Varner let the Twitter user know when his next tournament was.

The user behaved as well as they bet.

Some advice. Wager online. Don’t whine online. Don’t slide your thumb over to the-white-bird-on-a-blue-background app and tweet at a golfer if they play poorly. One, it’s bad karma. What goes around comes around. Two, it’s rude. Be better.

Of course, if you’ve followed this column, you’ve only won. Much like last week’s discussion on bad beats, this is all just theoretical.

This week, the PGA Tour is playing the Houston Open at Memorial Park Golf Course. Our Andrew Tursky correctly predicted the playoff at the Bermuda Championship, so we’ll let him kick things off this week. Who does he like?

“Imagine a Koepka win right before the Masters just to stir the pot? As golf fans, we need that to happen,” Tursky wrote.

A quick refresher on our game: Twelve members of our staff will make three $100 bets — to win, top 10 and a prop bet of choice — for each tournament from the Charles Schwab Challenge through the Masters in November. Each member starts with $4,000, and the odds will come from the DraftKings website. The first-place finisher will play a round of golf when it’s all said and done, and the last-place finisher is on the bag for the winner.

To-win: Sergio Garcia, +4,500. Now that he’s an honorary Texan, this should be a week for Sergio to shine.

Prop: Top 20, Denny McCarthy, +300. I’m not just picking him because he cashed for me last week! Yes, he was T4 in Bermuda, but he was also T6 a few weeks ago at Sanderson Farms. T20 this week feels like a slam dunk.

To-win: Scottie Scheffler, +2,200. A scrappy Texas native on the best muni in Texas. I like that combo at these odds.

Top 10: Brooks Koepka, +275. Beware the obvious pick, which this one is. They’re playing this week on a newly redone course. So it’s pretty much the first rodeo for everyone. But Koepka worked as a consultant on the project so he’s seen more of the place than his peers.

Prop: Winning margin, one stroke, +250. Strong field on a course that should yield a birdie barrage down the stretch. I expect it to be tight, with a few late lead changes.

Top 10: Wyndham Clark, +800. Keeps contending. I don’t think we see a hangover from his playoff defeat in Bermuda.

Top 10: Tyrrell Hatton, +225. Outside of the majors, he’s played well since the return to golf.

Prop: Dustin Johnson to miss the cut, +600. After missing time due to Covid, this is just a tune-up week.

To-win: Adam Scott, +4000. Scotty has been so consistent. If he putts well, he’ll be in the hunt. It’s Augusta season.

To-win: Tyrrell Hatton, +1,800. He’s GOTTA be playing angry after all that hoodie talk. Give me Tyrrell.

Top 10: Brooks Koepka, +275. With the added weight of last week’s Instagram Q&A weighing on his conscience, I think Brooks is up to the task this week. (Also, very legitimately, his game looked GOOD.)

Prop: To be decided by a playoff, yes, +400. Sunday drama before the Masters!

To-win: Scottie Scheffler, +2,200. A native Texan in his home state, it would be appropriate for the rising star to claim his first Tour victory in Houston.

Top 10: Doc Redman, +500. The 22-year-old has three top 5s in his past six starts. He might not have closed the deal in Bermuda, but I like him to bounce back strong this week.

To-win: Tyrrell Hatton, +1,800. He’s put together a strong 2020 already. Now he’ll add another big victory under his belt before the Masters.

Top 10: Adam Scott, +350. He hasn’t played for a while so he should be refreshed, and here’s guessing he’s been practicing at home to peak for the Masters. I’m predicting a solid showing in Texas.

Prop: To be decided by a playoff, yes, +400. Added drama with the Masters (and potential berth) on the horizon? Yes, please!

To-win: Brooks Koepka, +2,200. Imagine a Koepka win right before the Masters just to stir the pot? As golf fans, we need that to happen. As a bettor, I need this win.

Prop: Winning margin, two strokes, +350. I took the playoff prop for the win last week. No way it hits two weeks in a row, right? I’m going with the two-stroke win prop this week. Brooks by two!

To-win: Scottie Scheffler, +2,200. I’m rolling with the Big Texan in the Longhorn State this week. Time to get over the hump and pick up his first PGA Tour win.

Top 10: Doc Redman, +500. Coming off a strong week, I’m looking at Redman to build off that for another solid showing.

Top 10: Sergio Garcia, +400. Finding his form again in time for another Augusta run.

Prop: Brooks Koepka to miss the cut, +275. I won’t believe he’s back until he wins another major.

To-win: Tyrrell Hatton, +1,800. Did you know that Hatton is a top-10 player in the world? Seriously. And he’s been even better than that, of late. Scores will be low this week, but Hatton runs hot with the best of ‘em. Plus, if you see the monetary value next to my name, you know better than to follow this advice anyway, so, carry on.