Can you pick up your ball in the rough to identify it? 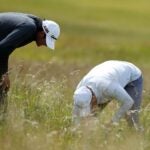 Picking up your ball to identify it in the rough is legal.

In case you haven’t heard, Winged Foot’s rough is nasty. We saw plenty of examples heading into the week on social media and the like, but now that the bright lights are on and competition has ramped up, we finally have a chance at seeing how penal it really is.

Take Tiger Woods on the 8th hole yesterday, for example. He hit a relatively straight drive, but his ball scooted into the deep stuff by just a few feet. His ball was immediately swallowed by the Winged Foot fauna. Even a mighty Tiger lash was no match as he could only manage to punch the ball back out into the fairway.

“You are also going to have balls where you are right on top of it and you can’t see it,” said NBC broadcaster Mike Tirico early in the week. “We are going to have lost golf balls, without question, throughout the week.”

Jordan Spieth got a taste of that on his second hole of the week as his drive drifted right of the fairway. Even with extra spotters on site to assist in finding balls, his was never found and he had to make the loneliest walk in golf back to the tee.

But even if the ball is found, you still have your work cut out for you. Aside from hacking the ball out of the thick stuff, you must determine if the ball you found actually is your ball. There’s sure to be some fallen soldiers left behind in the deep rough, and you don’t want to play the incorrect ball.

Rule 7.1 states that players “may fairly search for the ball by taking reasonable actions to find and identify it.” These actions include moving or bending anything that impedes your ability to identify your ball. And if you can’t identify it when taking these actions, you are allowed to lift the ball to identify it.

If the ball is your ball, or another players ball, you must replace the ball as near as possible to its original spot. The only caveat to this rule is that you are not allowed to clean your ball when identifying it.