4 examples of just how gnarly and punishing Winged Foot’s U.S. Open rough is 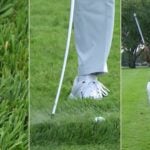 Tiger Woods tries to get out of the rough during the first round of the U.S. Open at Winged Foot.

We’ve heard about Winged Foot’s rough all week long — how long it is, how thick it is, blah, blah and blah. But now, on Thursday, we finally got an up-close view of the tournament conditions for the first round of the U.S. Open.

The verdict? This stuff looks nasty.

Mike Tirico, speaking on the NBC broadcast, even talked about how it’s realistic players will lose their balls in the rough — even with spotters there to help out.

“You are also going to have balls where you are right on top of it and you can’t see it,” he said. “We are going to have lost golf balls, without question, throughout the week.”

The broadcast also mentioned that the rough just off the fairway, beyond that first intermediate cut, is the thickest of all, simply because it’s closest to sprinkler lines and gets more water. That rough is about three-inches long and is cut every day to keep it consistent.

So, just how penalizing has it been to miss fairways or greens so far? Very. Here are four examples we’ve seen early in Round 1.

The slim margin of error was evident on the 8th hole for Tiger Woods. He hit a 310-yard drive, but it trickled just left and into the rough — a mere inches from the much more manageable intermediate cut and just a couple of feet from the fairway. Analyst Trevor Immelman called it a “horrendous lie,” and it was. You could hardly see the ball and Woods couldn’t even muster a full swing. From 172 yards away he used a 7-iron, barely got it 20 feet into the air and advanced it just 68 yards, leading to a bogey. He, as you might have guessed, was not pleased.

Justin Rose took an iron off the tee on the short par-4 11th — his second hole of the day — yet still missed the fairway left. On his approach from 127 yards he barely got it airborne halfway there, although he caught a break since it was somewhat on-line and rolled out to 21 feet away. Rose got up and down for par, but as you can see by the photos below, he was quite perplexed by his outcome on that second shot from the thick rough.

Wu had the early lead at two under when he made the turn around 9 a.m. ET, but he made his second bogey of the day when he missed the green on the par-3 10th.

Must of the time for pros, being in the bunker is a better alternative to gnarly rough, and Wu would have probably elected for the nearby sand here. Instead, from about 10 yards away, he hacked it out but it came up short, and the ball hit the sidehill and bounced back toward him, leading to a bogey.

Woods made three straight birdies on 9, 10 and 11 (and just lipped out a chance at a fourth on 12), but he went bogey-bogey on 13 and 14. He found the green-side bunker on the par-3 13th and missed the fairway on 14. On 14, he had 161 to the pin but only needed to hit about a 140-yard shot to the front of the green. That even turned out to be difficult to do. Check out Woods’ lie (and where his approach ended up) below, which led to his second straight bogey.