Rules School: What happens if an outside force moves your ball on the green? 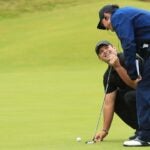 Rule 13.1 goes over the rules of the putting green.

If you’ve ever played on harshly sloped greens or in whipping winds, you know the fear of having a ball roll off the putting surface. Just when you think you’ve hit a good shot, the ball gathers momentum and runs away from the hole into an impossible spot. Play Pinehurst No. 2 and you’ll quickly understand the feeling.

Luckily, under the updated Rules of Golf, there is some reprieve is you face this fate. In this week’s edition of Rules School, we explain what you should do if your ball moves on the putting green.

Scenario: Your ball moves on the putting green because of an outside force, such as wind or gravity.

Old rule: Play the ball as it lies. You did not get to replace your ball if it moved on the green, no matter when it happened.

According to the USGA, “when a ball at rest is moved by natural forces such as the wind, it is normally played as it lies because its movement is considered a continuation of the previous stroke, as no person or object affected where the ball lies. But when the moved ball had already been lifted and replaced, the connection to the previous stroke is no longer obvious.”

So next time you hit a shot into a precarious spot on the greens, hurry and mark it — it might just save you some strokes.