Lost ball in U.S. Open rough? Here’s how to proceed under the rules 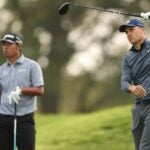 Jordan Spieth lost a ball in the rough when his tee shot went awry on the 2nd hole.

In case you haven’t heard, Winged Foot’s rough is thick. And not just normal thick. More like have-to-be-standing-on-top-of-it-to-see-it thick. With rough so gnarly, and no fans on site, there are sure to be balls lost just outside the short grass during this week’s U.S. Open.

Jordan Spieth met that fate on his second hole of the day during the opening round. He pushed his tee shot just right of the fairway only for the ball to never be found. Not exactly the way you want to start your U.S. Open.

And while you and your buddies might just throw down a ball for a one-shot penalty during your weekend games, that’s not how the Rules of Golf work. Even though it might seem unfair to lose a ball in a seemingly un-losable spot, you’ve still got to play it by the book.

Under Rule 18.2a, “your ball is lost if not found in three minutes after you or your caddie begin to search for it.” It might seem harsh, but that’s the rule. If 180 seconds pass by and your ball isn’t found, it’s time to take the penalty.

That penalty is covered in Rule 18.2b which states, “if your ball is lost or out of bounds, you must take stroke-and-distance relief by adding one penalty stroke and playing a ball from where the previous stroke was made.” Hope you played a provisional! Otherwise it’ll be a lonely walk (or ride) back to the tee.

Our advice? Do your best to avoid that nasty stuff outside the fairway. It’s much more difficult to lose a ball in the short stuff.