‘Look at the grin’: Charley Hoffman once got one of the best rules breaks ever 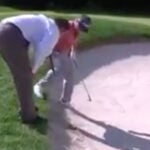 No protection? This was anything but.

Charley Hoffman can debate whether players should be better safeguarded by the rules of golf, but there is little argument of the kind of help he received five years ago. How could you tell? Just look at his face. His playing partner did.

“Look at the s**t-eating grin on his face,” Kevin Chappell said.

Indeed. And yet, it was those same set of rules that the longtime pro scorched on Friday night on Instagram. His ire stemmed from an incident during the second round of the WM Phoenix Open, where he misinterpreted the rules and was forced to take two penalty strokes after a drive into the water on the 13th hole at TPC Scottsdale.

“Did everything by the book,” Hoffman wrote. “It’s still mind blowing that a group of amateurs rule the professional game of golf. I also blame the @pgatour rules officials for putting out a terrible penalty area line where this could even happen. No accountability at any level here. No protection for the players at all. You wonder why guys are wanting to jump ship and go play on another tour. Players need transparency, protection and consistency.”

With that in mind, let’s jump back to the final round of the 2017 RBC Canadian Open. Hoffman hit into a greenside bunker on the par-3 12th at the Glen Abbey Golf Club, it plugged itself inches from the lip, and Hoffman assessed the damage. A short time later, he hit to the right of it after a penalty-free drop.

How come? After digging his feet in, Hoffman said he had unearthed a bunker liner that would interfere with his play. He and his caddie called over PGA Tour rules official Gary Young, made their case and eventually got relief. And the grief from Chappell. (A hat tip to the detail on this incident goes to this article from Geoff Shackelford.)

Two things to note. After the drop, Hoffman hit it short, and his ball didn’t make the green. “Some could say, that might be karma,” analyst Dottie Pepper said on the CBS broadcast.

And about a half-year later, the type of relief Hoffman received was no more. According to a 2018 Golfweek story, players were told at the 2018 Farmers Insurance Open that they could get a drop “only if a player’s swing path is impacted by a rogue liner. The Rules Committee may deem an exposed liner ground under repair. However, interference by a liner with a player’s stance is deemed not to be, of itself, interference under Rule 25-1.”