Accountability? ‘Where is his?’ Brandel Chamblee scorches Charley Hoffman 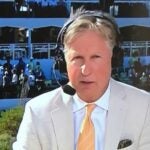 And then Chamblee became even more pointed.

“Does he think, and by insinuating that this is why players are leaving, does he think that the Saudi Golf League is going to be more transparent than the PGA Tour?” Chamblee said. “I hardly think that that’s the case.”

On Saturday, over five minutes on Golf Channel’s Golf Central Pregame show, Chamblee picked apart nearly all of the 280 words from Hoffman’s Friday night Instagram post, where the longtime pro blasted the PGA Tour, its rules officials and the USGA, then blamed each for “guys are wanting to jump ship and go play on another tour.” Hoffman had been upset over an incident during the second round of the WM Phoenix Open where he misinterpreted the rules and was forced to take two penalty strokes after a drive into the water on the 13th hole at TPC Scottsdale.

“Did everything by the book,” Hoffman wrote. “It’s still mind blowing that a group of amateurs rule the professional game of golf. I also blame the @pgatour rules officials for putting out a terrible penalty area line where this could even happen. No accountability at any level here. No protection for the players at all. You wonder why guys are wanting to jump ship and go play on another tour. Players need transparency, protection and consistency.”

“I would certainly challenge Charley Hoffman [that] this is not a legitimate grievance,” said Chamblee, himself a former player. “This is trivial. And it’s all on him. Where is his accountability? He said there is not accountability. Where is his accountability? This only happened because he was not aware of a rule. He is a professional golfer with millions of dollars at stake, FedEx Cup points everywhere that determine your path to wherever you want to go. You need to know the rules, especially when you are out there making drops that have serious repercussions if you don’t.

“John Wooden, who knew a thing or two about integrity and character, had a great line. He said, you are not a failure until you start blaming others for your mistakes. This was his mistake. He was clearly blaming others.”

The “no protections” statement was next. Twice Chamblee said: “Lord, there are so many protections for the Tour player.”

“Let’s just start with sponsor’s exemptions,” he said. “Sahith Theegala is in this event for sponor’s exemptions that is allowing him to have a chance. But they also exist for players who have been on the PGA Tour for a while who are struggling, who have sort of lost their exemption, and they got sponsor exemptions.

“They also have a top 50 and a top 25 career money list to give to players as sort of a safety net. They also have the Korn Ferry Tour where you continue to play golf when you’ve lost your card and still pay your bills. They have an unmatched pension fund on the PGA Tour that takes care of professional golfers as they age. And, of course, then there is the Champions Tour that allows players to sort of play this game at an older age and still be relevant.”

Hoffman’s “jump ship” comment was no doubt a reference to various proposed rival leagues, among them one that is backed by the Saudi Arabia-based LIV Golf Investments group and headed by Greg Norman. During last week’s Saudi International, also backed LIV Golf, reports began to circulate of multi-million dollar offers for Tour players to join, and they appear to have reached the ears of Hoffman, who is also one of four player directors on the PGA Tour’s Player Advisory Council.

Chamblee has been one of the most vocal critics of players potentially leaving, and Saturday he was more critical.

“And then he went on to say that there is no transparency,” Chamblee said. “Does he think, and by insinuating that this is why players are leaving, does he think that the Saudi Golf League is going to be more transparent than the PGA Tour. I hardly think that that’s the case.

“And let’s be real here. The reason players are thinking about wanting to jump ship is not because he didn’t know the rules and got penalized and made a double bogey and made a mess of things and made a mess of things last night on social media. It is purely for greed. It is purely for money. Because the league and the funds that are sponsoring the tour want to reputation-wash, sports-wash, that’s it. They don’t plan to make money.

“And by the way, this is a very unforgiving — if they leave here and go play for another tour, they’re going to go from being independent contractors to employees. And they are going to have the most unforgiving employer in the history of employers. Versus the most philanthropic organization. But by the way that runs six tours around the globe. So if you want to talk about growing the game, how about Latin America, Canada, China, all over the world they have these respective tours, the PGA Tour does, giving billions of dollars to charity and doing everything they can to protect the player from the time they come out of college till they decide to quit playing on the Champions Tour?”

After a comment from his co-host, Rich Lerner, Chamblee fired one last shot.

“Look, I’d have more respect for them, though not much, if they just came out and said, look, it’s a boatload of money and I’m conflicted. But the idea of trying to denigrate the business model that has allowed them to live lavish lives — Charley Hoffman has made roughly $32 million, $32 million with just four wins over the course of his career. To allow them to live lavish lives, to degenerate the PGA Tour, which, as I said, six tours around the globe, all of their money is either earmarked for charity, purses or the betterment of the tour, billions of dollars, and they’re trying to denigrate the PGA Tour and say that the Saudi League has their back, now nothing is more preposterous, and it boggles the mind that they would even try to make this argument.

“Just stand up and say what it is. It’s being offered a lot of money and we’re thinking about going.”