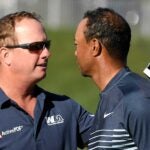 Charley Hoffman and Tiger Woods in 2018 during the Farmers Insurance Open.

Charley Hoffman has an Instagram page, most of his fellow PGA Tour pros have that or at least some other form of social media, and yes, like most everyone else a few weeks ago, they saw the photos.

And the locker room, Hoffman said Friday, has had the same comment over a potential Tiger Woods comeback that at least a few others have.

“There’s a lot of things to go through, and I, obviously, hope for the best for him and everybody’s pulling for Tiger Woods. This game is definitely a lot better with him in it, and I expect him to be out there sometime soon and hopefully competing to win golf tournaments.”

If there’s anyone who’s known Woods a while, it’s Hoffman. Both are Southern California born. Both are in their mid-40s (Woods is 45, Hoffman 44). Both are longtime pros. So when Hoffman slid into the Golf Channel booth during Friday’s second round of the Zozo Championship, his answer to questions on Woods from announcer George Savaricas were not without some substance.

In late February, Woods was involved in a single-car crash, suffered multiple injuries and has been rehabbing at his home in Florida. Updates on his progress have been limited, though the photos shared online, of Woods on a golf course watching his son, Charlie, at a tournament, have fueled talk of a return.

Count Hoffman in the camp hoping for one.

“I haven’t had any conversation with him, but he’s obviously kicked my butt my whole life and I was fortunate to play a lot of golf growing up with him,” Hoffman said on Golf Channel. “But he’s an inspiration to everybody, and that if there’s one guy that can come back and get his feet literally back on the ground, it’s going to be that guy and I’m never going to count him out.