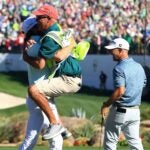 Sam Ryder and his caddie on Saturday after his hole in one on the 16th hole at TPC Scottsdale.

Check in every week for the unfiltered opinions of our writers and editors as they break down the hottest topics in the sport, and join the conversation by tweeting us @golf_com. This week, we break down Charley Hoffman’s rant against the PGA Tour, its rules officials and the USGA, the WM Phoenix Open and more.

1. Charley Hoffman threw a charge into the already electric WM Phoenix Open when, in an Instagram post on Friday night, he unloaded on the PGA Tour and the USGA for falling prey to what he perceived to be an unfair rule. After hitting his ball in the water on the 13th hole at TPC Scottsdale, Hoffman took a drop on a steep bank leading down to the hazard. When his ball wouldn’t hold with his first two drop attempts, Hoffman placed his ball, as is standard procedure under the rules. The ball held its place and was ruled in play, but moments later, it trundled back into the water again, leading to another penalty stroke. Hoffman found a more stable spot for his next drop and played on, ultimately making a double-bogey 7. “I was under the impression that the @usga had changed that rule,” he later wrote. “I was wrong. Had to take another penalty for doing nothing wrong at all. Did everything by the book. It’s still mind blowing that a group of amateurs rule the professional game of golf. I also blame the @pgatour rules officials for putting out a terrible penalty area line where this could even happen. No accountability at any level here. No protection for the players at all. You wonder why guys are wanting to jump ship and go play on another tour.” Let’s start with the rule. Does it, as Hoffman contends, need amending?

Dylan Dethier, senior writer (@dylan_dethier): Yes, it seems like a bad rule. There must be a way to amend it so that you can’t get ANOTHER penalty after taking a drop if you don’t personally cause the ball to move. Double jeopardy seems as unfair now as it did when Rickie Fowler suffered from the same thing at the same tournament a few years back. And had Hoffman expressed his dismay and left it at that, fans would have been behind him.

Josh Sens, senior writer (@JoshSens): I’m with Dylan. What happened to Hoffman seemed like cruel and unusual punishment. Let’s scrap the double jeopardy. But let’s also encourage the players to learn the rules.

Nick Piastowski, senior editor (@nickpia): I think Joel Dahmen, one of Hoffman’s fellow pros, summed it up pretty well on a comment on Hoffman’s post when he wrote: “Did @charleyhoffman gain an advantage against his playing competitors? If no, then there should not be a penalty.” Then again, I also agree with the comment of Emiliano Grillo, another pro, who wrote: “Don’t hit it there.”

2. Hoffman was roundly battered on social media for his heated reaction to the bad break, largely because, as many fans and observers saw it, he was using the incident to help justify his support for the Saudi-funded rival tour that has been courting PGA Tour members, chief among them Phil Mickelson and Bryson DeChambeau. Hoffman later said his message was misinterpreted — he said he alluded to the Saudi league only “so the media would catch it, so I would prove my point on the rules side.” There are multitudes to L’Affaire Hoffman, but what’s your read on how it played out?

Dethier: Fans are generally inclined to side with the opinions of their players — up to a point. Mickelson toed that line last week when he accused the PGA Tour of “obnoxious greed” when he is the one threatening to leave for a wheelbarrow of cash. Hoffman crossed the line by turning “I don’t like this penalty” into “this is why pros will leave the PGA Tour” and tagging the Saudi International. It feels disingenuous, and Tour fans can sniff that out. The comment sections reflected that sentiment.

Sens: The generous take is that Hoffman was extremely frustrated and spouted a bunch of inanities. It has happened to every human who ever lived. Unfortunately, he had social media right at his fingertips.

Piastowski: A thought that I can’t quite figure out through all of this is, will the Saudi League just be devoid of rules then? Like are mulligans in play? Winter rules? His play to draw attention to the infraction by saying that a rule is a reason why players might “jump ship” only made this worse. Say the rule is changed now. What happens the next time a player gets a bad break? The Tour wouldn’t want to open this Pandora’s Box.

Bamberger: Hoffman got battered because the golf-watching public figures if we had his golf talent, we would know the rules. He can say the rule could be improved. But we expect golfers to take responsibility for what they do. He did the opposite.

3. Hoffman’s rant comes on the heels of Mickelson hammering the Tour last week for its “obnoxious greed,” to which the PGA Tour offered a rebuttal to our James Colgan. Is this likely to be just the beginning of increasingly intense (and public) feuding between the Tour and potential defectors?

Dethier: Comparisons of Hoffman to Archduke Franz Ferdinand may be slightly overstated, but we can’t just keep talking about this potential league in theoretical terms, can we? There has been smoke and smoke and smoke in the form of thinly veiled remarks, rumors of large monetary offers and now Instagram comments. Something more substantial has to follow eventually.

Sens: Yes, giving players all sorts of opportunities to pretend that what’s drawing them to alternatives is something other than lavish sums of money. Hoffman would have us believe that the Tour’s failure “to protect “ players is a serious motivation? Please.

Piastowski: I get why players don’t want to say it’s about the money. But players thinking fans are naive and hoping that they can convince them it’s about something other than cash is just poor form.

Bamberger: This is just the beginning. The players, some of them, have an insatiable desire for more. The Saudis have an almost unlimited amount of money to spend in the name of looking modern. FIfty years from now, do you think the demand for oil will be anything like it is today? Not likely. But golf in the sunshine will be doing a robust business. This is only going to get more intense. If you like the status quo, buckle in. It’s going to be a bumpy ride.

4. Just when you thought the 16th hole at the WM Phoenix Open couldn’t get any wilder, a couple of aces — one by Sam Ryder on Saturday followed by another by Carloz Ortiz on Sunday — resulted in beer-throwing pandemonium unlike the game has never seen. Also on Sunday, we got a strip tease at 16, with playing partners Harry Higgs and Joel Dahmen baring their chests on the green. It’s a perennial question, but given the exceptionally wild atmosphere at 16 this year and the attention it generated, one that needs to be asked again: Should the Tour strive to create more stadium experiences?

Dethier: I think we can celebrate the spectacular atmosphere of TPC Scottsdale without wishing that more Tour events were exactly this way. So yes to stadium atmospheres, meh to constant beer showers. To put it another way: It was spectacular to see Harry Higgs in all his majesty on Sunday, but if he and Joel Dahmen started getting shirtless week in, week out, the bit might get old quickly.

Sens: You know how our scientific capability to clone a lot of things creeps some people out? Cloning the 16th would be scarier than anything taking place in a lab. Cool setting. One is plenty.

Bamberger: One is all right. One is plenty.

5. We’re told there was also golf played at TPC Scottsdale, with Scottie Scheffler winning in a playoff over Patrick Cantlay. Putting the revelry aside, what other storyline most captured your attention at the WMPO?

Sens: We’d seen glimpses already, but this week felt like the full-blown coming out party for Sahith Theegala, free-swinging, expressive, humble and brimming with game. Someone to root for.

Piastowski: Agree, Josh. And speaking of coming-out parties, Scheffler has finally cracked through and won. He wins again this year. And let’s have fun and say he wins the U.S. Open.

Dethier: These guys are right. I’ll just add this: Xander Schauffele came damn close to another win. And he came up just short. His PGA Tour drought grows, even as his sparkling ball-striking continues to dazzle.

Bamberger: I would only add to that there are a bunch of players coming up that are ready, or close to ready, to giving Dustin Johnson, Bryson DeChambeau, Brooks Koepka, Rory McIlroy a run for their money. PIP money, too — for those who care about it.

6. ClubTest 2022 drops Tuesday on GOLF.com with reviews of more than 80 new game-changing models. Which single gear change or upgrade from your playing career made the most impact on your game?

Dethier: Getting fit for irons changed the game. I was playing mega-stiff shafts for more than a year and, much to my chagrin, don’t swing the golf club nearly fast enough to need them. Getting proper flex in the shafts of some new Titleist irons made all the difference in the world.

Sens: The modern-day fitting was a big deal for me, too. But the more dramatic change came well before that: switching from a permission driver to a steel-headed driver. If you’re an amateur golfer of a certain age, how could it be anything else?

Piastowski: The insulated pocket in my golf bag. It’s been revolutionary for keeping the golf sodas cool.