7 viral rules controversies that captivated the golf world in 2021 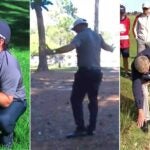 Patrick Reed, Phil Mickelson and Brooks Koepka were among those featured in notable rulings this year.

Another year is coming to an end, and it has us looking back at an eventful season in professional golf. It seems each year provides us with a host of rules controversies that captivate golf audiences, launching countless debates and hot takes across TV and social media. 2021 was no different.

Throughout the seasons on the PGA, LPGA, European and even Champions tours, bizarre rules scenarios cropped up frequently, causing varying degrees of controversy. Controversy also comes in many different shades.

A golf ruling can be controversial because a player is seen to be taking advantage of the rules, despite technically following the rule book. Some uproars break out when the rules seem to take advantage of a player. Other times the rules pit a player against another player, or team against team. Sometimes a newly enacted rule draws the ire of a six-time major champion.

But all of them draw widespread interest from golf fans, partly because it humanizes the superhumanly gifted pro golfers, and partly because all recreational golfers experience their own bouts with the rules at their local courses.

You can’t have a roundup of PGA Tour rules controversies without an appearance from Patrick Reed, and he might take the prize for most controversial rules scenario of the year.

At January’s Farmers Insurance Open at Torrey Pines, Reed hit a wayward shot into thick rough on the South Course’s 10th hole. When he arrived at his ball, Reed assumed it had embedded in the turf, which would lead to a free drop. Instead of first calling a rules official, he picked up the ball himself to check if it had embedded, which was later confirmed by a rules official at the time, and again after the round. But a video of the shot showed the ball bouncing before coming to a rest, causing many to question whether it could have truly embedded.

While Reed had technically followed the rules, by not letting a rules official make the initial call, as Rory McIlroy had done earlier in the tournament, he drew the ire of players and media members alike. No doubt his controversial history with the rules contributed to the criticism he received. In pure Reed fashion, he went on to win the tournament and capture his ninth PGA Tour title.

This is not the type of rule controversy you see every year, if ever in pro golf, and it’s all thanks to the fact that U.S. Ryder Cupper Harris English is a creature of habit. It turns out that English uses the same Ping putter grip that he used in college. And not just the same model — the exact same grip.

By the time the Ryder Cup came around, English’s grip was in bad shape, especially when it comes to a “banana flap” that had broken out on the grip not long before. Just before his final singles match against Lee Westwood, it became a real problem.

“I get to the course on Sunday — I’m literally walking into the clubhouse — and I get a call from Steve [Stricker],” English revealed after the tournament. “He said, ‘Hey Harry, I’ve got some bad news. We’ve got the head rules official here and he wants to take a look at your putter grip.’ I’m like, s—.”

It turns out someone had taken notice of English’s deteriorating grip during Saturday’s matches and alerted Ryder Cup officials. The officials met with English Sunday morning and officially deemed it non-conforming. But assistant captain Davis Love III saved the day. Armed with an X-Acto knife, he cut off the offending flag from the old grip, rendering it conforming just in time for Harris’ match.

Fortunately, the U.S. went on to win big that Sunday and reclaim the Ryder Cup. Unfortunately, after working with Ping to save the grip, English was forced to retire it and add a brand-new Ping Palm Lock to his putter.

On Day 1 of the 2021 Solheim Cup, World No. 1 Nelly Korda got involved in a bizarre and dramatic rules controversy that raised tensions in the biennial team event. With her match against Madelene Sagstrom and Nanna Koerstz-Madsen tied through 12 holes, Korda narrowly missed an eagle putt on 13 to put her team 1 up, with her ball coming to a rest on the edge of the cup.

While Korda dropped to her knees in disbelief, Sagstrom swept up the ball and tossed it back to Korda, conceding the birdie for another halve. Or so she thought. After meeting with rules officials on the side of the green, it was determined Sagstrom had not waited long enough to give Korda’s ball a chance to fall in the cup. As a result, Korda’s eagle putt was considered made, and the Americans went 1 up.

Sagstrom strongly disagreed with the decision (as did many European fans), saying, “Obviously I wasn’t following the rules about leaving the ball for 10 seconds. But I do believe in integrity and honor of the game of golf, and I would never pick up a putt that had a chance to go in.”

Sagstrom and the European team got the last laugh though, as they defeated the talented American squad 15-13 to win their second-straight Solheim Cup.

One of the biggest stories of 2021 was Phil Mickelson’s shocking win at the 2021 PGA Championship. But Mickelson also dominated on the PGA Tour Champions, increasing his victory total to four, including the season-ending Charles Schwab Cup Championship. But at Mickelson’s first senior circuit win of the year he got embroiled in a classic Phil rules controversy.

On the 16th hole during the final round of the Furyk & Friends event, Mickelson sliced a shot under some trees that came to rest on a bed of pine straw. As he attempted to remove loose impediments from around his lie, his ball moved, and it was all captured on camera. Mickelson pleaded with rules officials that under the recently revised rule Rule 9.2, he should not be penalized, because he didn’t cause the ball to move.

In this instance, the player’s word is what matters, and Phil stuck to his story, avoiding a penalty and eventually winning the tournament. But Mickelson did not escape of wave of criticism over his handling of the situation.

Golf Channel analyst John Cook may have said it best on the broadcast: “You start moving pine straw around — there’s long needles. So … interesting.”

Tensions and emotions get elevated at the Ryder Cup. It is the nature of the hotly contested event that pits the top players from the U.S. against Europe, and it was on full display during one particular rules fiasco involving Brooks Koepka.

In the midst of a heated Day 2 alternate-shot match against Sergio Garcia and Jon Rahm, Koepka’s teammate Daniel Berger left his tee shot deep in some fescue lining a bunker. While prepping to hit the next shot, Koepka noticed a drain next to the ball, and called in rules officials to ask for free relief. A heated discussion ensued, with Koepka refusing to give in easily.

After calling in another rules official for a second opinion (and after causing Sergio to spit out his water in laughter), Koepka was denied again, but he got one last word in before hitting his shot.

“If I break my wrist, this is on f—— both of you,” Koepka said, pointing at the two referees.

Opinions on Koepka’s testy scenario fell along partisan lines, with European broadcasters having some fun with the moment during the Sky Sports telecast.

During the 2021 WGC-Dell Technologies Match Play, Dustin Johnson and Kevin Na were in the middle of Friday match with very low stakes given that Na had already technically been eliminated from advancing in the tournament. And that may have played a role in the awkwardness that ensued on the 11th hole.

After lipping out on his birdie try, Johnson walked up to the hole and scooped up his golf ball that was resting just a foot away. Putts of that length are almost always conceded, which is probably what was on DJ’s mind. The problem is, Na had not conceded the putt.

As a result, Na could have called him out on it and won the hole. In fact, the rules required it. Instead, Na walked up to DJ, put his arm around him and explained to him what the problem was and that he needs to wait for the concession before picking up his ball.

“I called him over and said, ‘Hey, I’m not going to take the hole from you, but I just want to let you know before I said something you whacked the ball,'” Na said after the match. “But I’m going to give that putt to you so we’ll call it a halve and go to the next hole.”

In the end, Johnson claimed he had heard Na say, “It’s good,” following his putt, which is why the whole scenario was able to be resolved without penalty.

Back in August, six-time major champion Phil Mickelson took to Twitter to use his bully pulpit to argue against a rule change the USGA was considering.

“Word is USGA is soon rolling back driver length to 46inches. This is PATHETIC.,” Mickelson wrote on Twitter, “1st it promotes a shorter more violent swing (injury prone,) doesn’t allow for length of arc to create speed, and during our 1st golf boom in 40 years, our amateur gov body keeps trying to make it less fun.”

Mickelson’s strong opinion on the topic was no accident. Phil used a 47.9″ driver to win the 2021 PGA Championship at Kiawah Island, and his longer shaft played a big role in the recent distance gains that have kept him competitive on Tour.

Then in October, the USGA made the change official, announcing a new local rule that reduces the maximum drive length from 48 to 46 inches, and Mickelson was quick to jump onto Twitter to reiterate his opposition in Phil fashion, writing, “Stupid is as stupid does. Mrs Gump. Really though, are the amateurs trying their best to govern the professional game the stupid ones? Or the professionals for letting them?”