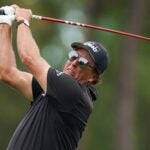 Happy Holidays from our gear team at GOLF.com. To bring you into the New Year the right way, we’re counting down our top 21 equipment-related stories from 2021. For the latest gear news, check out our dedicated equipment section, and click here to listen to GOLF’s Fully Equipped weekly podcast.

The biggest golf equipment saga of 2021, by far, was surrounding the length of driver shafts. Prior to the governing body’s recent announcement, which allowed tournament officials to cap driver length at 46 inches under a new local rule, the limit on driver length was 48 inches.

Although few PGA Tour professionals actually used drivers that stretched all the way to the 48-inch limit, there was growing concern that longer-length drivers would become the norm. Bryson DeChambeau announced he had been testing 48-inch drivers following his 2020 U.S. Open victory. Phil Mickelson won the 2021 PGA Championship using a 47.9-inch driver, and players such as Viktor Hovland and Dustin Johnson experimented with the concept, too.

Before the USGA made its ultimate decision, there were rumblings that the 46-inch rule was on the way. Mickelson, as a 47.9-inch driver user and vocal leader on the PGA Tour, took to Twitter in August to skewer the USGA.

There were no mixed words. Mickelson did not support the decision.

Following the USGA’s official ruling in October, other PGA Tour players expressed their concerns and confusion about the driver length rule, as well.

Justin Thomas, for example, said, “Yeah, I don’t really agree with it. I think it’s — I don’t know. I feel like there’s a lot of other things, you know, like the arm-bar putter, that they should be approaching as opposed to the length of driver. I think the fact that you see only a few people using a long driver speaks for itself, that it’s not really that big of an advantage. It’s a lot harder to hit it straight.”

Dustin Johnson had similar sentiments: “My opinion is more, I don’t think it matters what length someone uses, because the longer the driver gets the harder it is to hit straight. So if you could hit a 48-inch driver and keep it on the planet, then more power to you. I’ve tested with ‘em, and yeah it goes further, but it also goes a lot more crooked. You lose a lot of control, so for me, I don’t think it’s necessary.”

Whichever side you fall on in the driver-length debate, one thing remains true; Mickelson rarely holds back when something is bothering him, and his take on the USGA ruling made for one of the most-read gear stories in 2021. To read the original story in its entirety, click here.