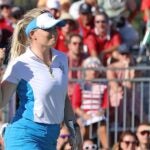 Matilda Castren pumps her fist after winning her match and retaining the Solheim Cup for Europe.

Just two months ago, Matilda Castren was far from eligible for the European Solheim Cup team. As a non-member of the Ladies European Tour, she needed to win an event to earn membership, which would then unlock Solheim Cup eligibility.

Time was ticking, but Castren found a solution: She went to her native Finland for the Gant Ladies Open and won the 54-hole event, gaining LET membership and Solheim Cup eligibility in the process.

Fast forward two months to Monday at Inverness Club in Toledo, Ohio, and Castren came up big again in a clutch moment again, this time clinching the Solheim Cup for Europe. The 26-year-old rolled in a tricky par save on the 18th to beat Lizette Salas 1 up and give Europe the 14 points it needed to retain the Cup.

“It’s hard to put it into words right now. I think I’m still shaking,” Castren said. “I was looking at the board and I knew it was going to be an important putt and I wanted to make it, and me and Mikey read it and read it perfectly and it went in. I’m just so happy right now.”

“Just a superstar,” European captain Catriona Matthew said of Castren. “I mean that putt she holed on 18, she had a plugged lie in the bunker and then to roll that putt in the middle — we just all kind of exploded on the side of the green there.”

The Europeans and Americans each won five singles matches and tied the two others for a 15-13 European victory on U.S. soil. The win is Europe’s second straight and fourth in the last six meetings.

After two days and four sessions, Europe started Monday leading 9-7 with 12 points from 12 singles matches still available. The Europeans needed just five points to retain the Cup, while the U.S. needed 7.5 to win.

The first match of the day featured two of the most popular players in the event, Lexi Thompson and Anna Nordqvist. Thompson has long been one of the leading faces of American women’s golf, and Nordqvist is Europe’s most experienced player and coming off a Women’s Open title and third career major title. It was also a rematch of the 2017 Solheim Cup in Des Moines, Iowa, when the pair led off that year as well and traded blows in an epic battle that ended in a tie.

On Monday, three hours after teeing off, they were still all square through 13 holes. Behind them, with the final match through five holes, Europe led in eight matches and the U.S. was in front in just three.

The first point of the day was claimed by 26-year-old European rookie Leona Maguire, who beat Jennifer Kupcho 5 and 4 in the third match out. Kupcho was having a strong Solheim Cup debut with a 2-0-1 record, but Maguire turned out to be the Europeans’ MVP. Maguire, the first Irish woman to play in a Solheim Cup, played in every session and finished 4-0-1.

Within the next 30 minutes Europe would strike again, and in convincing fashion. Not long after Madelene Sagstrom beat Ally Ewing 3 and 2, Celine Boutier breezed by Mina Harigae 5 and 4.

At that point, Team Europe was in total control, up 12-7, but the Americans weren’t yet out. Of the nine matches remaining, Europe either trailed, was tied or leading by no more than 1, meaning the U.S. still had a chance to flip the script — but a miracle comeback would require everything going right.

It was around this time Thompson and Nordqvist reached the 18th hole all square. Both had long birdie putts to win but settled for pars and tied the match. World No. 1 Nelly Korda soon beat Georgia Hall 1 up to make it a 12.5 to 8.5 deficit.

The next match that headed toward the 18th was crucial. Austin Ernst and Nanna Koerstz Madsen were tied through 17, and given the status of the Cup, this was one full point the Americans needed to steal from Europe. But after Koerstz Madsen missed her birdie try, Ernst, from about 12 feet, missed short and left and they tied the match.

In the eighth and ninth matches of the day, Americans Brittany Altomare and Megan Khang picked up wins to cut it to 13-11 Europe, but as they wrapped up Salas was coming down the 18th hole 1 down to Castren. That meant she needed to win the 18th hole for a half-point or Castren’s point would be enough for Europe to retain the Cup. After Salas missed her birdie putt and tapped in for par, Castren rolled in a downhill 10-footer to save par, win the match and secure the Cup.

Europe was guaranteed the outright win a few minutes later when Emily Pedersen went 3 up with three to play against Danielle Kang, meaning Pedersen would secure at least a half point. Pedersen eventually won 1 up.

“Two years ago at Gleneagles in Scotland was fantastic, but this time in America we were up against it,” Matthew said. “The Americans were a fantastic team this year. They played hard. We just perhaps holed a few more putts and were lucky we came out on top.”

The U.S. still leads the all-time series 10-7. The next Solheim Cup will be at Finca Cortesin Golf Club in Casares, Málaga, Spain, in 2023.