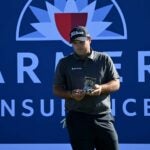 Rule 16.3 of the rules of golf is built to provide relief from embedded balls like the one Patrick Reed alleges he saw Saturday.

By now, you’ve probably heard the story of Reed’s controversial embedded ball scenario during the third round of the Farmers Insurance Open. On the par-4 10th hole, Reed received relief for a ball he believed was embedded in the ground after his approach shot missed left into thick rough.

That he received relief was not all that contributed to the situation’s questionable legality — rulings such as the one Reed received on No. 10 at Torrey Pines are fairly commonplace on Tour, particularly in bad weather weeks. Rather, it was the circumstances surrounding Reed’s handling of the situation that earned raised eyebrows.

Things began to shift when the former Masters champion quickly removed his ball from its original position before it could be analyzed by a rules official — an unusual but not illegal decision. He was told by a volunteer that his ball had not bounced when it landed, which surely added to his conviction in picking up. But there was just one problem: video replays showed that the ball had, in fact, bounced, making Reed’s claim of an embedded ball nearly impossible (by his own admission).

So, what should he have done differently? According to the rules of golf, not much.

In 2019, Rule 16.3 was amended in order to address “relief from embedded balls.” The rule gives clear parameters with which players are authorized to take drops due to embedded balls, as described in the diagram below.

As the rule lays out, Reed was well within his rights to take relief from the embedded ball, but on one condition: the pitch mark causing his ball to be embedded had to be his own.

This is where things get confusing for Reed, because he may have very well believed his pitch mark was his own, particularly considering he was told his ball hadn’t moved when it struck the ground. So, what happens then? Rule 16.4 stipulates Reed is allowed to remove his ball from the pitch mark, but must mark the spot to see if relief is allowed.

“If you reasonably believe that your ball lies in a condition where free relief is allowed under the Rules, but you cannot decide that without lifting your ball, you may mark the spot and lift the ball to see if relief is allowed,” the rule says. “The lifted ball must not be cleaned (except when it is on the putting green).”

Reed followed each of these procedures during the situation on the 10th hole Saturday. When a PGA Tour rules official came over to inspect the area, he agreed with Reed’s assumption, and ruled that Reed’s ball was embedded and he was free to take a drop.

But as is prone to happen in a self-enforced sport, the controversy is not with the rule but rather with how Reed’s judgment call falls into golf’s moral “gray area.”

If Reed saw the ball bounce (a question only he knows the answer to), he would not be within his rights to ask for relief. The same goes for another question only he can answer: how embedded was his original ball?

If he didn’t see his ball bounce and it wound up truly embedded in a pitch mark, then perhaps the entire situation can be chalked up to a misunderstanding. If either of those things were not as Reed presented them to the rules official, his taking relief could be considered a rules violation.

In either case, Reed took relief, knocked his pitch onto the green, made par on the 10th hole and ignited the golf world. He enters Sunday’s final round firmly in contention.

Ah, another weekend in the life of Patrick Reed.