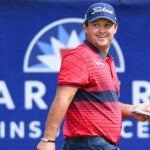 Patrick Reed cruised to a five-stroke win on Sunday at Torrey Pines.

Whether a golf ball bounces en route to embedding or not doesn’t matter. All that matters is how it lies when it comes to rest.

But have you ever seen a ball bounce in the rough, settle in the rough and land with enough oomph to break the ground’s surface? Golf balls just aren’t that heavy. A fully-grown bowling ball can weigh up to 16 pounds. A cannonball. A golf ball weighs just 1.6 ounces. You know, physics.

“I feel a lip,” Fabel, a former Tour player, said after inserting his fingers in the hole created by Reed’s ball. (Only in golf.) Well, I’ll be damned. Twice on one single Saturday.

There was no social-media hysteria over Rory McIlroy’s situation because he’s Rory McIlroy and people like and trust him.

The Reed scenario melted the Golf Wide Web, because of what Reed said, how he said it, because of his history and because he was leading the tournament. This is the tournament, now called the Farmers Insurance Open, that Tiger Woods, Reed’s childhood golfing hero, won seven times. Corporate America loves to align itself with the PGA Tour because so many corporate executives love golf and because PGA Tour players are so, so clean. They police themselves. We’ve all heard that a million times. Although, as a starting point on Reed, I would say he embodies the same us-against-the-world mentality that made Tiger Woods Tiger Woods.

This has been noted before and will be noted again. Here is the first full sentence on the first page of the current rule book: “Play the course as you find it and play the ball at it lies.” The rest is commentary and nuance.

Let’s also revisit this spectacular preamble to an earlier edition of the rulebook:

“All players should conduct themselves in a disciplined manner, demonstrating courtesy and sportsmanship at all times, irrespective of how competitive they may be. This is the spirit of the game of golf.”

The starting point for every play-it-as-it-lies rules dispute is this: given how the ball lies, can the player play the shot he or she wishes to play? Reed, approaching his ball after two shots on the par-4 10th, knew, in the language of the game, he had nothing. He was looking at some kind of floppy pitch out of long, wet rough over a bunker to a tight pin. A lie you never want to see, even if you have Reed up-and-down magic.

Spectators were not at the tournament, because of the pandemic. As Reed approached his ball, he asked a volunteer spotter, “Did it bounce?” — that is, did it bounce before settling? He got the answer he hoped to hear, that it had not. As it happens, the answer was neither relevant nor correct.

A CBS camera showed that the ball did bounce, but any lawyer would praise Reed’s question. After the spotter answered that it had not bounced, as she did, Reed was then emboldened to see if his ball had embedded. If she said it did bounce, he could still see if his ball was embedded. His question was actually a win-win, and a distraction.

In 2012, Reed, trying to find steady employment on the PGA Tour, qualified six times for events via Monday qualifying, events with virtually no spectators and high stakes, where all the juice comes from deep within the player. These pandemic PGA Tour events without fans have a similar feel. But unlike those Monday qualifiers, they have TV cameras and boom mics.

Calling for a rules official was the smartest thing Reed could do, because it took all the responsibility off him and put it onto the official. If he was certain that he was entitled to embedded ball relief, he would not have needed an official at all. By the way, your fellow players and even their caddies and spectators are (de facto) rules officials, too. TV footage is, too. Those of us watching that TV footage used to be, but those days are over. If you and only you watching at home see a player carrying 15 clubs it’s as if it did not happen. I think that’s weird but only three people agree with me.

When Fabel arrived, Reed explained his situation saying essentially that the ball was not just sitting in its own pitch mark but that it had broken the surface of the ground itself, as the embedded ball rule requires, “but I’m gonna let you make that call.”

As a matter of language, and Reed of course is not writing law here just talking, no rules official needs to be told that the player is going to allow the rules official to be the judge. The rules official is the judge. Reed was subtly trying to make the case that he had the power there. He didn’t. Seve Ballesteros used to use a similar tone, though he did it with a certain Continental charm.

Fabel, because he was a player long before he was a rules official, asked permission before lowering his fingers into Reed’s embed mark because it’s an odd thing, to touch a player’s lie. He didn’t need to ask but he did: “Mind if I stick my finger in there?”

It hardly needs to be said: These situations have no script. But that doesn’t mean we can’t look at them for nuance and to see how character reveals itself in real time.

Let’s take a brief detour here to revisit the 2000 U.S. Open at Pebble Beach, when Woods won by 15. Here, with minor editing, is first-person testimony published by Sports Illustrated from Woods’ rules official on the weekend, Trey Holland.

“On the third hole on Saturday, Tiger hits his second shot short of the green, near a bunker. The ball sinks in the grass. He says, ‘I think my ball is embedded.’ If it’s embedded, he gets a free drop. There’s an intensity in his voice. He knows how he wants this to come out.

“I say, ‘Mark your ball, lift it and test the dirt with a finger. If the plane of the dirt — not the grass but the dirt — is broken, it’s embedded.’

“In Sunday we’re back on the first tee. He says hi. Doesn’t say anything about the ruling. He plays his final round, wins the U.S. Open. I congratulate him, and he says, ‘Thanks, that means a lot. But I sure would have liked to have gotten that drop yesterday on three.’ Twenty-eight hours later and after winning the Open by 15 shots, he was still thinking about it. I was under the clear impression that he wanted to win by 18.”

At the 1999 Phoenix Open, in the fourth round, Woods asked a Tour rules official if a one-ton boulder was a “loose impediment.” The official said it was, if the boulder was “readily movable.” A dozen grown men, spectators, moved the boulder. (It helps to have a gallery and a camera on you, except when it does not.) The USGA ultimately backed the official’s call. It mystifies me still. How can a 2,000-pound boulder be a loose anything? Woods’ question alone violated golf’s ideals. If you think this is high-minded nonsense, that’s OK. It tells me we see the game in a fundamentally different way.

For years, Reed wore a red shirt and black pants on Sundays, just like Tiger before him. Now he’s moved on to red, white and blue.

Did Fabel get it right? Logic will tell you he did not but golf’s a funny outdoors game where weird things happen. He didn’t put his finger in that hole looking for logic. He went in there to see if the surface of the ground was broken, as the rules require. He felt a lip. Music to Reed’s ears. He dropped into a far better lie and got up-and-down for 4.

Tiger loves Reed’s short game. When Jim Furyk was looking for somebody to play with Reed at the 2018 Ryder Cup, Woods told Furyk, “This kid’s tough as nails. I’d roll with him anytime.” A year later, Woods made Reed a captain’s pick for his Presidents Cup team. That team won in Melbourne a week after a rules debacle, at Tiger’s own event in the Bahamas, in which Reed clearly improved his lie in a waste area by taking two practice swings and flattening a tiny hillock of inconvenient sand behind his ball.

The veteran official Slugger White gave Reed a two-shot penalty and said Reed handled the situation like “a gentleman.” It was maybe an unnecessary thing to say but White had a job where you have to protect the field but also protect the reputation of the PGA Tour. Reed said he “accepted” the penalty, as if he had a choice. Please.

Had the U.S. lost in Melbourne to the International team, I think Reed would have been roasted by his fellow players, at least by way of anonymous quotes.

As Tiger once said in a Nike ad, “Winning takes care of everything.”

It’s not a true statement. Witness the electronic noise surrounding Reed’s win in San Diego, even though he technically did nothing wrong. He felt he qualified for embedded ball relief and a Tour official agreed. For any other player, that would be the extent of the story.

As we all know, Reed went on to win the tournament. In his press conference, he was asked if golf reveals a person’s character. He thought for a few seconds and said, “For sure. I feel like golf is a game where it’s won not just by talent, but hard work and between the ears. It’s how are you able to handle it mentally and figure out a way to get it done.”

He was asked how his golf reveals his character. “The biggest thing is how resilient and passionate I am for the game of golf,” he said. “And also how passionate I am for my country. There’s no other reason why I’m wearing red, white and blue today.”

Evidently, Reed’s nickname is Captain America. I have never heard anybody actually call him that. He and McIlroy did have an epic match at the 2016 Ryder Cup at Hazeltine. Their facial gestures were hilarious. They reminded me of Tiger in his prime.

McIlroy explained what he did and it seemed that nobody batted an eye. Just the weirdness of golf. The Reed situation was completely different.

That’s because history has weight. You can’t give it a number, like 16 pounds or 1.6 ounces. But it does.