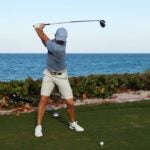 Ed. note: It’s an old adage in golf: A slow and smooth takeaway. Don’t waste your energy on the backswing, the thinking goes. But is that true? Prompted by curiosity Bryson’s ever-growing swing speeds, I called up one of the brightest minds in golf, Dr. Sasho MacKenzie (who you can follow on Twitter right here), for an explanation…

In 2019, Adam Scott averaged 120 mph with silky smooth tempo, Hideki Matsuyama averaged 117 mph with a virtual pause, and SungJae Im averaged 115 mph, with the most deliberate backswing on Tour. On the other hand, McIlroy and Finau have some pretty sporty backswing speeds and both averaged over 121 mph.

We should start with the knowledge that your muscles are the only meaningful power source in the swing. Gravity is not powerful and tends to suck as much energy out on the backswing as it adds on the downswing. Air resistance is the only other power source and is always dragging speed down.

As an aside, the ground is not a source of power. Forces from the ground are very important and, among other things, help your muscles generate power, but that’s a topic for another article.

A muscle’s power tells us how fast it is adding energy to the swing, and clubhead speed will increase as we get more of that energy generated by the muscles out to the club. In general, we want our muscles to add energy into the system (aka, our golf swing) in a proximal-to-distal manner, which means that muscles closer to the middle of the body should move before muscles further away. So, for example, it’s advantageous to have the muscles that twist the torso (proximal) at the start of the downswing ramp-up before the muscles that uncock the wrists (distal).

A muscle’s power depends on how much force it is generating, and it takes time for us to ramp-up the level of force in a muscle. One way athletes ramp-up that force, quickly, is to initially bend joints in the opposite direction (e.g. quickly squatting before jumping). These ‘counter movements’ give athletes time to ramp-up their muscle force prior to the start of the forward motion. A higher force at the start of the forward motion allows a muscle to add more energy into the system.

A backswing is the golfer’s counter movement.

Consider muscles that twist the torso (e.g., the obliques), which we want to ramp-up early in the downswing. McIlroy’s obliques will fire to stop the backswing motion and will be already generating a high level of force as soon as the torso starts rotating in the downswing direction. Hideki’s start from a pause means his obliques will be generating a relatively low force as the torso starts rotating. McIlroy’s dynamic transition, relative to Matsuyama’s pause, sets-up up an advantageous scenario for McIlroy’s obliques to add energy (speed) into the torso. A faster torso speed in the downswing creates a chain reaction which adds speed to each muscle along the way.

The pros and cons of making a faster backswing

The same is true in golf. While virtually every golfer will benefit from taking a backswing, most amateurs would require a lot of training to take advantage of a faster backswing, like Rory’s in this case. As one downside, taking a faster backswing could negatively impact your transition sequence resulting in lower clubhead speed and/or directional control. There is likely an increased probability of injury as well. Bryson DeChambeau’s violent backswing on display in 2020 is certainly helping him achieve unparalleled speed on Tour; however, it is his athletic talent and hard work that allows him to benefit from this swing characteristic.