Bryson DeChambeau just hit a drive 428 yards — and made bogey 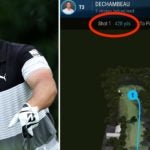 Bryson DeChambeau turned the 10th hole at TPC River Highlands into a flip wedge — but that didn't guarantee anything.

Bryson DeChambeau made quite the turn on Friday at the Travelers Championship.

On No. 9, golf’s new longest driver pulled the big stick on the 389-yard dogleg right par-4 and sent an absolute missile straight at the green, where Jon Rahm was still putting. The ball landed just short of the green and bounded just off the left side, where Rahm stared daggers at it. In all, the ball traveled 358 yards, and because he ignored the dogleg altogether, DeChambeau actually hit it past pin-high.

But that was nothing compared to what happened next. No. 10 is a 467-yard par-4. You, dear reader, might have a tough time getting there in two shots. Not DeChambeau, who pummeled driver down the right side of the hole.

Exactly 100 yards later, the ball came to a stop in the edge of a storm drain, 428 yards from where it had started.

To quote No Laying Up, “He already has the cheat codes and now he’s got bowling lane bumpers.”

The point is not the distance itself — players have hit cart paths and hit tee shots fluky distances plenty of times. The point is that DeChambeau, who now leads the PGA Tour in driving distance, is bringing things into play that were never before thought possible. It’s hard to imagine anyone else on Tour hitting into Jon Rahm from 360-plus. And it’s hard to imagine anyone else cresting that hill on No. 10 to reenact that lemon-rolling video along the cart path curb.

The final point is much more about golf. DeChambeau had a good lie in the rough just 48 yards from the hole on a beefy par-4.

He misjudged the way the ball would come out of the rough, his wedge shot rolled over the green and he took three shots to get in from there for a disappointing bogey 5.

We’ll spare you any rhymes about putting for dough, but there’s some beauty in DeChambeau’s first bogey of the day coming off his longest tee shot. Never a dull moment.