This is the biggest thing heads-up putting helps golfers improve 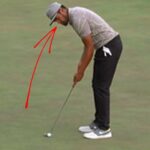 If you want to improve your distance control, putting while looking at the hole is one of the best things you can do.

Heads up putting. It’s an innovative concept that questions the validity of one of the oldest cliches in the book: Keeping your head down, and your eye on the golf ball over putts.

Biomechanist Sasho MacKenzie has taken a deep dive into this via a 2017 study which found, in a nutshell, that golfers who adopted the heads-up putting technique (AKA, looked at the hole when they putted) improved more than those who kept their eyes locked on the golf ball. And while the average golfer improved putting heads up, there’s one specific type of golfer it tends to help the most: Golfers who struggle with distance control.

When it comes to the literal act of hitting a putt, golfers are essentially trying to do three things at once: Hit the ball with good contact, in their intended direction, at their intended line. When Mackenzie studied how putting while looking at the hole affected these things, he found that golfers’ contact got slightly worse (though not significantly), that their accuracy stayed the same, but their speed control improved significantly.

“If I asked you to throw a ball, but then told you to look at your feet, that would feel weird, right?” he says.

Sasho explains that heads-up putting helps golfers focus on their target more and react to it better. The resulting improvement in distance control outweighs the slight drop in contact quality. Because, as Sasho explains:

“It turns out that speed is really important in putting.”

You can watch him explain the concept below — and even drop a long putt at the end of it.

The Etiquetteist: Sandbaggers in your midst? Here's how to deal with them