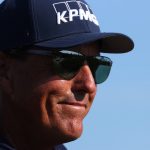 KIAWAH ISLAND S.C. — Asked how he could possibly do the unthinkable and win a major at age 50, against men half his age, Phil Mickelson’s answer was simple.

“I worked harder,” he said.

“I work harder physically to be able to practice as long as I wanted to and I’ve had to work a lot harder to be able to maintain focus throughout a round. If I work a little harder, spend a little more time in the gym, eat well, practice hard, there’s no reason why I can’t put it all out there for 18 holes.”

And nowhere is that hard work and sacrifice more apparent than in Phil’s physical transformation.

For most of his professional golf career and, indeed, his life, Phil looked like the rest of us: Slightly soft around the middle. And then, rather than letting his career vanish into the twilight, something switched.

Armed with a new diet and a sense of purpose, the soft-and-smiley Phil became lean-and-macho seemingly overnight.

If you’re looking for a proper deep-dive into Phil’s diet, I’d highly recommend my friend and colleague Sean Zak’s first-hand look trying Phil’s coffee-and-water fast. If you’re looking for something a little more high-level, think of it this way: Generally speaking, Phil eats less of everything and better overall. It’s a good rule to follow for anyone looking to lose weight.

Specifically, Phil structures his eating around periodic fasts. He goes on longer fasts, like the kind Sean tried, and shorter ones. He does three-day fasts every few months as a way of resetting his immune system; he does shorter fasts more often, saying after his final round that he fasts for 36 hours straight once a week.

“It gives my body a chance to reset,” he said.

Phil said he alters his 36-hour, day-and-a-half weekly fast depending on his schedule. Usually, if he’s playing, it’s at the start of the week.

That’s the formula for Mickelson’s diet that works for him: 1.5 days of fasting to cleanse and detox his body so it can recover, 5.5 days of healthier eating overall. But while the results are self-evident, it doesn’t come without sacrifice.

“Food,” Phil said, when asked what his biggest sacrifice was, before taking a more holistic view on his new healthier lifestyle. “I’ve got to eat a lot less and I’ve got to eat better. I just can’t eat as much and I have to let my body kind of recover. But it’s also been a blessing for me because I feel better and I don’t have inflammation and I wake up feeling good. It’s been a sacrifice worth making.”

A sacrifice worth making, indeed.

Ready to jump in and start your GOLFTEC Journey? Fill out this form to book a swing evaluation or club fitting! A local GOLFTEC Coach will contact you to discuss your game and goals.
Book now