Jim Nantz’ call of Phil Mickelson’s win was just four words, and it was perfect 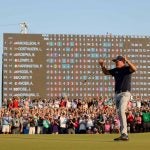 Jim Nantz has had a front-row seat to Phil Mickelson's greatest achievements.

When Phil Mickelson had left all of six inches between him to and a par to finish his epic PGA Championship victory, you had to be on the edge of your seat.

Not only was one of the greatest players of all-time capping off an historic performance at one of the toughest courses on the planet; we were also going to hear a legendary sports broadcaster choose a few important words to marry with the moment.

It’s not easy, but Jim Nantz was the man for the job. He’s made a career of covering the biggest moments in golf, and many of those moments have now become synonymous with his voice and his word choice. Nantz was even there for Mickelson’s first major win at the Masters in 2004.

“Is it his time? Yes!” Nantz said at the time. Seventeen years later, he was on hand for CBS to do the job again.

With all the context of Mickelson’s recent slump, that he broke the record for oldest major winner, the result was simply perfect: “Phil defeats Father Time.”

Check out the entire sequence below.