Phil Mickelson reveals the 2 secrets behind his weight loss transformation 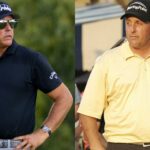 MAMARONECK, N.Y — It was about a year and a half ago that Phil Mickelson decided to start chasing distance — “bombs” and “hellacious seeds,” to be more precise. That new approach led him down the path of living a healthy, more active lifestyle. Fast-forward the 2020 U.S. Open, and Mickelson is in the best shape of his life, boasting swing speeds golfers half his age would be proud of, and he launched his own health company along the way.

14 years-on from his close call at the 2006 U.S. Open, the last time the U.S. Open was contested at Winged Foot, Phil looked a lot different. He even highlighted his transformation earlier this week on social media:

It’s been fun for golf fans to witness the transformation in real time, but there was one thing (apart from the picture, obviously) that stood out in his post above: the phrase “becoming accountable for my own health.” What does that mean, exactly? I was curious, so I asked him about it following his Tuesday practice round at the U.S. Open.

Get Educated, Be Honest

Phil says being accountable for your health all comes down to two things: being educated and honest about what you’re consuming, and how. Earlier in his career, Phil said he didn’t know or care what he ate. He ate whatever he felt like, and didn’t think about the consequences. It was only later in his career that he realized the consequences of that attitude:

So, if anybody wants to follow his advice for losing weight and living a healthier lifestyle, that’s the place to start. Learn about the food you’re eating, and how much of it you should be eating. Once you get educated and honest, it’s easier to change your habits and make better decisions. Do that, and maybe you can have a Mickelson-esque transformation, too.