How my first-ever lesson fixed my swing in minutes 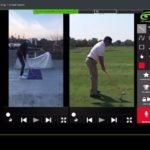 With Zoom integrated in their platform, Golftec is offering free virtual lessons through their app.

“I have an assignment for you,” read the message from my one of my colleagues. “Get a free golf lesson, then write about it. Interested?”

Hell, yes, I was interested. Getting to improve my golf game at work — is there a better deal than that?

So, that’s what I did. The gratis lesson was available via instruction and clubfitting provider Golftec. I downloaded the Golftec app onto my phone, created an account and I was all set. The “book virtual lesson” button greeted me upon opening the app which navigated me through a few questions before allowing me to upload a swing video. A few moments later, my lesson was booked with my very first swing coach.

Amazingly, this would be my first formal lesson. Throughout my years in golf, I’ve worked plenty on my swing, but never with an instructor. The closest I’ve gotten is a casual tip from a playing partner or a video breakdown on my own. I’ve become a fairly competent golfer, even working my handicap into the low single digits at one point, but that was in spite of my self-taught swing, not because of it. But now, under some rather unusual circumstances, the day of my first ever golf lesson had arrived.

Like so many services in the Covid-19 era, golf instruction has been forced to innovate over the last several months, pivoting into the virtual realm. With stay-at-home orders blanketing much of the country, Golftec seized the moment as an opportunity to push forward with virtual lessons. According Nick Clearwater, Golftec’s vice president of instruction, the company had been exploring the virtual lesson concept even before the coronavirus pandemic, but with many of their locations shuttered for the better part of two months they decided to accelerate the process and push it to market.

“When pandemics hit and you realize you’ll be closed for a while, it’s a perfect time to help you look into some new services and products,” Clearwater said.

Golftec integrated Zoom into its own software to connect with the students and allow for communication during the lesson, which is how I came “face-to-face” with Nick Schivao. As we got started, Nick pulled up the video of my swing I had sent along prior to the lesson. We discussed my normal misses — a block fade and the occasional hosel rocket — and why those things happen with my swing and then he got started breaking it all down.

“The first thing would be the setup. You’re standing far too close,” he said.

Nick pulled up a video of Daniel Summerhays to compare his starting positions to mine. The pro had his arms dangling freely away from his body while I was crunched together in my slender frame.

“I’d say straighten out the legs a little bit,” Schiavo said. “You can see his knees are a lot less flexed at setup. That’ll give a lot more space for your hands to work properly in your swing.”

A solid setup is the foundation for any good swing, but without any proper guidance for all these years, I crept closer and closer to the ball. Could this be the fix for the dreaded shank I’ve been known to hit from time to time? That remains to be seen, but as you can see below, my new setup looks worlds better than where I was before.

Nick broke down my takeaway next and noted that I was getting too far inside with my first move.

“The first move as you take the club back, the clubhead starts to roll to the inside and the face opens up,” he said. “This is going lead towards more pushes and the hosel leading towards the ball.”

My two main misses could be explained in the first three feet of my swing and this instructor diagnosed it in a little under two minutes. Why did I wait so long to take a lesson again?

“Honestly I think just change that setup and the way you bring the club back,” Nick said.

The session lasted no more than 10 minutes, but I walked away feeling enlightened. I actually had concrete things to work on in my swing instead of feeling my way through it.

The next time I got in a practice session, I focused on these keys. The moves felt a bit odd — shaking bad habits in your swing is never easy — but when I watched the tape I was amazed by how much better my positioning was, as you can see in the series of photos below.

There’s nothing wrong with a self-made swing, but getting an opinion from a professional instructor can do wonders. If you’re on the fence or hesitant about lessons (just as I was), just give it a shot. You might just be converted.

I have a feeling my second-ever lesson is right around the corner.

Rules Guy: When hitting from heavy rough, is it permissible to flatten the grass behind the ball with your club?

How to hit on a sidehill lie: 5 tips for when the ball is below your feet