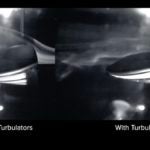 Notice how the turbulators help break up the airflow.

When you actually stop and think about it, the act of hitting a golf ball is a pretty astonishing feat. Even for recreational golfers, how often do you get to do anything sports-related at over 90 mph, launching a ball 150 mph along the way.

The design of the golf club itself is, obviously, an integral part of being able to do that. The engineers designing the club factor in everything, from the weight, design, shape and the aerodynamics.

I was reminded of the latter earlier this week when PING dusted off some old footage from its video vault showing the company wind tunnel testing its G30 driver, the first driver to feature “turbulators” on the crown of the clubhead. Here, you can see why.

When researching the design of the club, they found that the inclusion of turbulators on the crown of the clubhead broke up the air flow far sooner than a clubhead without them, which the company says reduces drag and allows for faster clubhead speeds.