Meet the 90-year-old man playing 1,000 holes of golf for charity 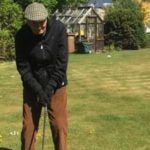 For even the most hardened addict, playing 1,000 holes of golf requires serious commitment. To hit the millennial mark in a year, you’d have to play 55 full 18-hole rounds, then add an additional 10 holes.

Collins, as “Bunkered” first reported, is a golf diehard, sporting memberships to Royal Troon, Royal Prestwick and Turnberry, even at the spry age of 90. When Covid-19 closed courses throughout Europe, Collins was distraught. Before the virus, he’d been playing golf as many as four times a week. Now, he had nothing to do.

So the nonagenarian Jan did what any self-respecting golf addict would do: he called his son Ben and his local course. A few days later, Jan and Ben Collins got to work, armed with equipment loaned from his local course’s greenskeeping crew. In his backyard, the pair built a five-hole course. The holes are no longer than 30 or 40 yards each — all Jan needs to keep his game sharp while he’s stuck indoors.

But Jan wasn’t satisfied solely with keeping his game sharp, he hoped his course would give people other than himself a reason to smile. Enter, the Garden Golf Challenge.

Less than a week later, Jan has already surpassed his fundraising goal and is well on his way to the 1,000 hole mark. On day six of his Garden Golf Challenge, Collins has already played 410 holes.

Fans who wish to donate to Jan’s challenge can do so here. All funds raised through the campaign will support Marie Currie (a group that provides care for the elderly) and STV Children’s Appeal.

For now, Jan hopes to keep raising money while he enjoys exclusive access to one of the few open golf courses in Scotland. Not bad for the life of a 90-year-old golfer.