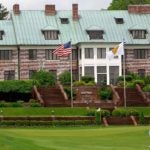 The 18th green and clubhouse at Hamilton Farm Golf Club in Gladstone, N.J.

It’s been 15 years since I was first invited to Oakmont Country Club. There were 12 of us on that trip to Pittsburgh. Besides being generous enough to invite all of us, our host Jerry, who lived in Atlanta, was something I’d never heard of before: a national member.

He could have been an intergalactic member for all I cared. What mattered to me was the golf and the camaraderie. We were walking the same holes as the greatest champions — Jones, Nicklaus, Snead, Hogan, Els — even if we were three- and four-putting the same greens. I still have vivid mental pictures of the course, the clubhouse, the house by the 18th green where we stayed.

It’s certainly a good deal for the club — scores of members paying initiation fees and dues but rarely stepping on the property. But how good of a deal is it for the member? And how hard is it to join one of these exclusive clubs?

Most national memberships, it turns out, are less expensive than I thought. Prairie Dunes, designed by Perry Maxwell and ranked No. 31 on GOLF’s list of the Top 100 Courses in the World, has hosted USGA championships and is lauded for its links feel far from an ocean. The initiation costs about $10,000 and can be paid over several years. Annual dues are a few thousand dollars.

Getting to Hutchinson, Kansas, isn’t easy. But like any serious national membership, Prairie Dunes has lodging for members and guests to stay on the property.

A national member at Old Sandwich, a Coore-Crenshaw design in Plymouth, Mass., says he found that initiation fees for national members were about 40-60 percent less than those for full-time members, and the dues were half.

Landing a national membership can be almost as simple as making a phone call. That’s what Ryan Duffy, who works in financial service sales and lives in Darien, Conn., did when he became a national member at Hamilton Farms in New Jersey. When his firm moved his territory to New England, he joined Boston Golf Club, the acclaimed Gil Hanse design in Hingham, Mass., by calling the head professional and meeting the club president and his wife.

“With these national memberships you need to know a couple of people and just find a sponsor to vouch for you,” he says.

There are exceptions to the low-cost, easy-entry systems. Augusta National and Pine Valley are for all intents and purposes purely national memberships, but good luck getting in there.

The initiation fee at The Floridian in Palm City, Fla, which boasts two ex-presidents as members — George W. Bush and Barack Obama — as well as PGA Tour professionals Dustin Johnson and Rickie Fowler, is $150,000.

Higher still is Scottsdale National Golf Club, created by PXG founder Bob Parsons. It costs $300,000 to get in, plus $60,000 per year in dues. But the admissions process at the club, which has 45 holes of golf but only 145 members, requires that prospective members apply to participate in what’s called the Xperience, which runs $30,000 and lets people stay at the club like a member would. What exactly determines whether someone gets in? A dinner with Bob and Renee Parsons.

Greg Adondakis, who lives in Salt Lake City with his wife Tara, recently joined through the Xperience. It’s the couple’s fourth club membership. “It had a different feel,” he says. “One, it’s a purely national club; and two, not being a member-owned club, and having one person run it, it just seemed how courses should be run.”

They signed up midway through the Xperience and extended their stay.

A national membership can be an investment in both a business and free time. Duffy, who is often in Boston for work, uses the club during the week to build his business. Rick Young, who works in private equity, also belongs to Boston Golf, but for him it’s a family getaway.

“You’re not paying for volume,” he says. “You’re paying for the experience. At the same time, they can get you access to other courses you want to play.”

Yet not all national membership are five figures to join. A cheaper way in is to get the junior rate by joining before you’re 40. A decade ago, Young locked up his membership at Kinlock Golf Club, a top-rated course in Virginia, for $1,000. And when it first opened, Chechessee Creek Club, a Coore-Crenshaw design in South Carolina, offered national junior memberships for $5,000.

The greatest deal may be an international membership. One at Melbourne’s Kingston Heath, ranked 22 in the world by GOLF, will costs you $1,500 a year, and that outlay gets you member access to other top courses around the world, including Walton Heath in England; Portmarnock in Ireland; the Philadelphia Cricket Club; and Nine Bridges in South Korea.

Of course, however cheap a national membership is, you still need the extra income to get and stay there.

Aaron Abrahms, an insurance executive who created the Breaking 10,000 blog (breaking10000.com) to chronicle his quest to break 100 on the world’s Top 100 courses, says his national memberships have certainly helped him add courses to his list. He’s now at 80 and partly attributes this to the golfers he’s met around the country.

Players also have to be realistic about how often they’re going to get to these clubs. (It’s probably also a good idea never to calculate the cost per round.) Boston Golf limits the rounds to 15 per year, plus tournaments, but for many members getting there four times a year would be an accomplishment.

David August, a radiologist in Phoenix, says he works one full week on and one week off, which lends itself to bursts of golf. He belongs to Desert Forest in Carefree, Ariz., and joined Prairie Dunes four years ago.

“If I time everything correctly, I can leave my house and 4 hours and 30 minutes later I’m on the golf course,” he says. Still, he only gets there three to four times a year.

“I have other golf courses to go to,” says August, who is married but does not have children. “The only thing I have a regret on was not doing it earlier.”