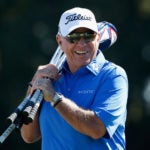 Butch Harmon is one of the most revered golf coaches on the planet — ever, really. The World Golf Teacher’s Hall of Fame member is an inspiration for golf instructors everywhere, and has helped thousands of golfers over the course of his storied career. When he talks, we listen.

This week, the legendary golf coach appeared on GOLF contributor Mark Immelman’s podcast, and dropped a series of fascinating, hilarious and utterly brilliant pearls of wisdom he’s learned through the years. There’s so many of them, and the only way to do it justice is to listen to the podcast in its entirety. Trust us, it’s well worth you time:

My favorite pearl came when Butch, in passing, revealed what he says is the “secret to golf.” He literally used those words, so, naturally, my ears perked up.

What’s the secret, according to Butch Harmon? It’s “repetition”:

“Anybody who loves golf should go to St. Augustine to the World Golf Hall of Fame, because there’s hundreds of strange-looking swings in there, and they all work. Because the secret to golf is repetition.

He continued by pointing to Jim Furyk as an example; someone whose swing isn’t something you’d teach to anybody, but it’s one that he has the ability to repeat on command:

“Look at Jim Furyk, he’s just about to turn 50, he still competes on the PGA Tour with a swing that … if his father had changed that swing to make it look perfect, we’d have never heard of Jim Furyk. [The legends of golf] had a lot of strange characteristics in their swing. The common thread was getting the club square at impact and being able to repeat it time and time again.”

Now, I know what you’re thinking. That “repeatability” isn’t much of a secret, because people want to know how to be repeatable. That’s the tricky part, but Butch goes on to say that your best chance is not to try and imitate another golfer’s swing, but to perfect the tools at your disposal. Work with a good coach who keeps things simple, and remember that the common thread is getting the clubface back to square at impact.

Use this feeling in transition to improve your swing sequencing

Why this 1 mistake could be hurting your distance *and* accuracy

This training aid will strengthen your spine — and your swing

This is the 1 thing amateurs should copy from Jon Rahm’s game, according to his coach