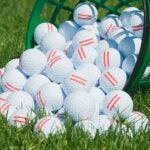 When it doubt, try to figure it out on the course — not the range.

For many golfers, that means heading to the driving range. Working through a big bucket of golf balls as a way of troubleshooting the cause of what went wrong, and how to fix it. Except, at least according to one coach, that might be exactly the opposite of what you should be doing.

Justin Parsons is one of the best coaches around. After years studying under Butch Harmon, he now works out of Sea Island and coaches Harris English and Louis Oosthuzen, among others. He’s also the most recent guest on Claude Harmon’s GOLF.com podcast “Off Course” (which you can subscribe to on iTunes right here).

And Parsons says golfers should be wary — very wary — of spending hours on the driving range.

“I think think the driving range is one of the most dangerous places for golfers to live.” he says. “I’ve probably spent far too many hours of my own time trying to perfect things.”

Why you should fear the driving range

Parsons says the reason why is because of a lack of consequences. When you hit a bad shot on a driving range, it doesn’t matter. On a golf course, it obviously does. When golfers put themselves in an environment where the bad shots don’t matter, their games won’t necessarily improve.

“It’s one of the least accountable places there is as a golfer,” he says. “At least on the putting green, you can ‘I holed this many putts from six feet’, or you can do chipping games; it’s very, very hard to quantify your behavior on the driving range. We fall down this trap of trying to be absolutely perfect on the driving range, forgetting that the driving range has absolutely nothing to do with the golf course.”

The range can, of course, serve a purpose. It’s good for ironing out your technique, and for warming up. The problem comes when you treat it as a solution to all your golf problems. It’s not; when you have an issue in your game, you’re often better off figuring it out on the golf course.

Listen to the full episode below.