What’s the best trash talk Tiger Woods has ever dropped on Phil Mickelson? 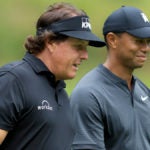 You can expect a bit of smack talk between Phil Mickelson and Tiger Woods on Sunday.

Mickelson has won 39 other tournaments during his PGA Tour career. And he won 2018’s The Match. Over Woods.

Mickelson says he’s needled Woods over those victories a few times. He might needle him a few times more during Sunday’s The Match: Champions for Charity, a match play event featuring the team of Woods and Peyton Manning taking on the team of Mickelson and Tom Brady for charity. Mickelson is a good trash-talker, and this is good trash-talk.

But this is better:

“Tiger is very subtle in his smack talk, and he has gotten me with ‘big picture,’ “ Mickelson said on a Callaway Golf podcast this week when asked about Woods’ best dig at him. “So every time I say, ‘Oh, I remember I beat you here at the Deustche Bank or I ended up beating you here at AT&T in 2012 blah, blah, blah,’ he just kind of puts his hands (up) and says, ‘Big picture.’

It’s hard to argue with.

Then Mickelson did. A trash talk of the trash talk.

“He uses that line – he overuses that line,” Mickelson said on the podcast. “Yeah you’re the greatest player in the world, you have the best record. Of course, big picture, you know? But let’s be creative, let’s come up with something a little bit more insightful; that’s your go-to line.

“He gets me with it every time, of course, but I think he could do better too.”