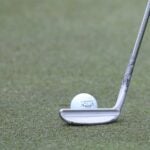 When Phil Mickelson speaks, the golf world tends to listen. You can go ahead and add his equipment manufacturer, Callaway Golf, to the group as well. The OEM has gone above and beyond for Mickelson since he signed with the brand in 2004, creating, among other things, custom prototype metalwoods, wedges and putters for every conceivable situation.

Golf’s ultimate pitchman usually gets what he wants.

Of the custom items he’s used over the years, one prototype has enjoyed a lengthy run in the bag: an 8802-style Odyssey Phil Mickelson Blade Prototype putter. Mickelson has tried out mallets, different White Hot inserts, arm-lock and updated versions of the wand, but he’s always returned to the blade profile that’s served him well for three decades. (Major championship hardware always ensures a putter an extra-long leash.)

Most of Mickelson’s creations have come to retail in some form or fashion over the years, but his trusty putter has remained a pipedream for gearheads. But that could be changing in the not-too-distant-future — if the six-time major winner has something to say about it.

Odyssey’s Twitter account recently congratulated Mickelson on his latest PGA Tour Champions win — his third win in four career starts, but who’s counting? — and ended the tweet with a question: “What if we offered a Small Batch of @PhilMickelson‘s PGA Championship winning putter?”

Followers made their intentions known that they’d welcome the chance to own a copy of Mickelson’s major-winning putter, as did the man himself, who offered his own seal of approval.

If Mickelson is ready and willing to let golfers bury putts with a replica version of his trusty putter, then we might very well see something positive come from this tweet. After all, Callaway and Odyssey have a history of listening to their pitchman.