Arm-lock Mickelson? Here’s why Phil is experimenting with a new putter grip 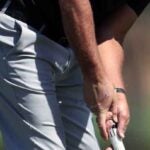 Mickelson's putting system has been altered in time for a new PGA Tour season.

With the PGA Tour’s one-week offseason now in the rearview, some players are already tinkering with new gear or playing styles in the first week of the new season. Count Phil Mickelson among them.

Mickelson is playing with a new(ish) putter this week at the Fortinet Championship in Napa, Calif., and it appears to be of the arm-lock variety. Really, Mickelson is using that classic blade putter he has used throughout his career, but the grip extension on it makes it seem like a new club altogether.

“I’ve been messing with it for about six weeks,” Mickelson said after a first-round 70 Thursday. “It takes a little getting used to, but it seems like I’ve had moments where I just start rolling it in from everywhere.”

GOLF’s Jonathan Wall shared a photo of the putter when Mickelson first added it to his bag in early August:

The extension is a jumbo-sized grip that now runs up his leading (right) forearm, like many arm-lock putters do. The grip rests comfortably up against the forearm for enhanced stability of the putter face throughout the stroke.

Regardless of how “pinned” the club is against his forearm, the way Mickelson actually holds the club in his hands is still the same. So to the TV viewer, from afar, the new putting system will look almost exactly the same. But to the trained eye, the difference will be a bit more obvious.

“I had been working on it and in some practice rounds like I’ll get on a roll and just start making a lot,” Mickelson said. “Today, they were the four-, five-, six-footers for pars that I was leaving a little bit short. I wasn’t really — I had two or three from 20 or 30 feet that I made, didn’t quite go in, but they were really good putts. I’m hitting them solid, online.”

Mickelson is hardly the first and will not be the last player to experiment with a putter grip that runs a bit longer than normal. Is this one arm-lock putting by definition? It’s hard to say for sure. But for Mickelson, it’s definitely different.

It wasn’t long ago that Xander Schauffele, one of the best putters in the world this year, broke away from his typical grip setup to try arm-lock putting during the middle of the summer. Ironically, this came after he said the style should be banned from play. Unsurprisingly, it didn’t last long for Schauffele.

After about a month, in which Schauffele rode a rollercoaster of up-and-down putting performances, he ditched the style and moved back to his standard setup. This, of course, played out well for him in Japan as Schauffele won the gold medal at the Tokyo Olympics.

Need help on the greens at your home course? Pick up a Green Book from our affiliate company, Golf Logix.