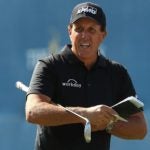 Mickelson spotted using the "Tiger Slayer" putter at the 2020 Players Championship, this time with a SuperStroke putter grip on it.

Phil Mickelson was the life of the party, so-to-speak, during The Match II on Sunday. He was dishing out gems of trash talk and explaining his thought process on certain shots, which made for great entertainment despite losing the match. He’s the perfect complement to Tiger Woods, who is a bit more quiet and calculated (although Woods did fire a shot about U.S. Open medals… ouch).

Lefty’s digs started early, as he explained to Turner Sports’ Amanda Balionis pre-round that he brought out his “Tiger Slayer” putter.

It’s a custom Odyssey putter that Mickelson used to take down Woods at the 2012 AT&T Pebble Beach Pro-Am. Mickelson and Woods were paired together that Sunday, and Mickelson went onto win after shooting a 64 to Woods’ 75.

The putter is similar in design to the popular Wilson 8802 blade model that Mickelson has used throughout his career. The Odyssey version that Mickelson used in 2012, and again on Sunday, has a custom White Hot XG insert in the face and has a relatively low amount of loft.

Although Mickelson’s banter made it seem like he brought the putter out after a long retirement just to mess with Woods, that’s not entirely the case. Mickelson has used the “Tiger Slayer” putter off-and-on since 2012, and he’s even had it in the bag during PGA Tour appearances in 2020. Most recently, he had it in play at the 2020 Players Championship (before it was canceled), the Arnold Palmer Invitational, and The Genesis Invitational.

So while Mickelson hilariously calls the putter a “Tiger Slayer,” it didn’t come straight out of his closet after an eight-year hiatus just for The Match.