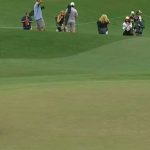 Matt Kuchar lines up a putt.

When Matt Kuchar switched to an arm-lock style of putting in 2010, it was arguably one of the most innovative putting technical changes in golf history. It sailed through the anchor ban unscathed, and an ever-increasing number of players have adopted the technique to the benefit of their own game.

At the 2021 Masters, Kuchar debuted another new style: The reverse arm-anchor.

“I’ve never seen that,” CBS on-course analyst and co-host of GOLF’s SubPar podcast, Colt Knost, said during the telecast on Friday. “He played pretty nice the last couple of weeks. Very surprised to see him switch that.”

Kuchar has used his arm-lock style for the better part of 10 years. As GOLF Top 100 Teacher James Seikmann demonstrates below, the setup is the same, but using a specifically designed putter with more loft and a longer shaft, the club sits up against your lead forearm. It creates a relationship between the lead arm and club, which can prevent you’re stroke from getting too wristy and, in theory, more consistent.

As for Kuchar’s new style? He’s resting the grip-end of the club against his trail arm. It places his hands behind the ball — which means the putter he’s using would require much less loft — but the general theory is still the same.

Ultimately, whatever style you choose, the first principles of putting remain the same: Reading the greens well, aiming the putter correctly and being able to make a repeatable stroke.

Want to really dial in your putter? Schedule a fitting with the experts at our sister company, True Spec Golf.