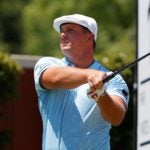 Bryson DeChambeau hits a drive at the 2020 Charles Schwab Challenge.

“You’re crazy,” Nolan thought to himself. “He got a good laugh [from everyone there].”

After putting on 20 pounds, and currently averaging 323.8 yards per drive in 2020, DeChambeau clearly wasn’t joking. But, with all this speed increase, wouldn’t you think he’d have to switch driver shafts into something stiffer as to not lose accuracy?

Well, he didn’t have to. And that’s where this shaft story gets interesting.

With the goal of 20 lb. and 20mph increases in mind, way back in 2019, DeChambeau told the shaft makers at LA Golf that he wanted a driver shaft that he could “grow into,” as Nolan explains. Of course, that line of thinking goes against most conventions of club fitting. Typically, shafts are fit to a player’s swing at the moment, not for a pipe dream of increasing speeds of 20-25 mph. That’s like buying an XL shirt size when you’re really a medium, expecting to pack on massive muscle.

DeChambeau has always curved convention, though, apparently even when it comes to driver shafts.

“It’s never been done this way,” Nolan explains. “Bryson is a true designer. Usually engineers dictate the spectrum when it comes to shafts… but he didn’t care about E.I. curves or traditional CPM (cycles per minute). He wanted something totally different.”

After making 26 iterations of prototypes, DeChambeau and the LA Golf team (DeChambeau is a partner with LA Golf) came up with his current LA Golf prototype driver shaft. It was a shaft that fit his driver swing at the time, but it would also fit him as his swing speed increased, according to Nolan.

Note: There are two versions of the prototype shaft. One is called “Trono,” which DeChambeau uses in his fairway woods, and another called “MRDR 1,” which has the same design but is slightly stiffer and has lower torque, that he uses in his driver.

Due to special inserts, DeChambeau’s shaft is 40-50 percent stiffer in the mid section than some competitive Tour-level shafts, according to Nolan, and it’s relatively soft in the tip section. It’s also very soft in the butt section, creating a “whip” effect, as Nolan says. The active tip section of the shaft allows DeChambeau to release the club head from his extremely inside-to-out driver path, while also minimizing unwanted droop at impact.

“It’s like a solid door shutting into the golf ball,” as Nolan describes it.

To prepare for DeChambeau’s speed increases down the road, LA Golf tested that same prototype shaft with professional long drivers to see how the shaft would hold up to speeds of 210mph+.

According to Nolan, the shaft held up to the high speeds, and it will continue to perform for DeChambeau as his speed increases.

“The harder he swings it, the straighter it will go,” says Nolan.

Conventional wisdom says that shouldn’t make sense, but DeChambeau isn’t conventional, and his driver shaft isn’t designed to be, either. The only change he’s made to his driver setup recently is he lightened up the head weight from 196 grams to 185 grams on his Cobra King SpeedZone 5.5-degree driver (yes, it’s only 5.5 degrees) for even more speed.

“Bryson questions everything, but even if he’s wrong or we think he’s wrong, we still try it,” Nolan said. “We can always get off that wrong road if it proves not to work.”

Well, so far, the road of weight gain and speed increase is working for DeChambeau, and his driver shaft is becoming the perfect fit.