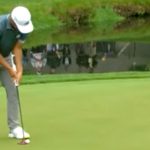 Xander Schauffele is, by most all measures, one of golf’s better putters. Entering this week’s Memorial, he was ranked ninth on the PGA Tour in Strokes Gained: Putting, 13th in total putting and 22nd in putting average.

Then about a week ago, he locked the grip of his putter against his left forearm.

Schauffele, on Thursday at Muirfield Village and, by the sound of things, for the foreseeable future, became the latest player to use the arm-lock putting grip, following, among others, Bryson DeChambeau, Webb Simpson, Matt Kuchar and Will Zalatoris. But while Schauffele admits it makes the putting stroke simpler, it does so, too, at the expense of the rules.

“It takes the stress of putting out of the game,” Schauffele said. “It’s — putting is so stressful in golf, obviously hitting shots and chipping and all kinds of stuff are difficult, but your putts are what give you the score on the card. And so — it’s ruined people’s careers and it’s helped people’s careers. And so I think putting is an art in our game, and when you can lock it into your arm or anchor it to your body, it kind of gets rid of that.”

Schauffele is also not the first to argue that the arm-lock grip is a form of anchoring, which is illegal. (According to Rule 10.1b, a player’s putting stroke must not include an “anchor point” on which they plant their forearm — i.e., the technique used with broomstick putters, with the end of the putter (or the player’s forearm) anchored against a player’s chest.) At the RBC Heritage earlier this year, Billy Horschel, said this of the arm-lock: “I don’t know. Yes, you could say it’s anchored. I don’t know because I guess anchored is having one point against somewhere and a fixed point. I know that’s not fixed, but it’s something similar to an anchor style.”

But if Schauffele is against it, and he’s already one of better putters, then why do it?

“I am for banning the armlock putters, but if everyone else is going to use it and I feel like they have a bigger advantage, I may as well do the same,” he said.

“Yeah, obviously I wouldn’t have done it if I didn’t think it was better,” he’d add later in his post-round interview. “If I was No. 1 in putting with a short stick, it wouldn’t have even been a thought. But I just feel like at times I can make more putts and, obviously I am in the top 10 — like I looked when I was switching — and I felt like it was — I’m in a position where I have nothing to lose and if I can get better at something, then I can.”