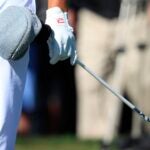 A detailed view of a driver belonging to Bryson DeChambeau is seen as he stands on the ninth tee during the final round of the Arnold Palmer Invitational at the Bay Hill Club and Lodge.

It’s the little details that usually make the biggest difference on the course. For Bryson DeChambeau, his win at the Arnold Palmer Invitational just happened to coincide with adjustments to two of the most important clubs in his bag — the driver and putter.

While most golf fans were fixated on DeChambeau’s gargantuan drives on the par-5 6th hole at Bay Hill, a few eagle-eyed gearheads noticed the reigning U.S. Open champ was pummeling the ball with an all-black driver.

This wasn’t a top-secret creation but rather an older model Cobra King LTD Black that DeChambeau has been using on and off for several years. The head was paired with an LA Golf Axis Blue 60X shaft that, according to Cobra Tour rep Ben Schomin, helped DeChambeau tighten dispersion off the tee.

While DeChambeau is known for playing one of the most robust shafts on Tour, he actually went to a slightly softer profile and shed 8 grams of weight (from 76 grams to 68 grams) to better match his release.

Another change that flew under the radar was the addition of a longer neck to DeChambeau’s Sik Pro C Armlock putter. According to Sik reps, the longer hosel is closer to the centerline, which reduced toe hang by 20 degrees. DeChambeau’s launch numbers were the same during testing, but he preferred the feel and increased stability the longer neck provided.

The minor adjustments paid big dividends for DeChambeau, who led the field in Strokes Gained: Off-the-tee and ranked 21st Strokes Gained: Putting en route to the 8th win of his PGA Tour career.

The image of Jordan Spieth’s battered SuperStroke Traxion Flatso 1.0 putter grip should be hung on the wall as a reminder of what it takes to make it as a professional golfer. Lengthy practice sessions are the norm for the Tour’s elite and judging by the wear on Spieth’s handle, he’s spent countless hours grinding over putts with his Scotty Cameron 009.

The wear would lead you to believe Spieth hasn’t changed grips in years. He made a similar change in 2019 in San Antonio when he replaced a SuperStroke grip that was roughly two years old, so the timing checks out. Only this grip is actually from the fall, according to SuperStroke Tour rep Arnie Cunningham. As in last fall.

Someone has been working extra-hard on the greens.

Tiger Woods calls it “army golf,” but most golfers know it simply as the “two-way miss.” One miss goes to the left. The other goes dead right. For a pro, there’s nothing worse than missing it in both directions during a tournament round. Some pros even build their driver or 3-wood to eliminate one side of the course to take the worst-case scenario out of play. (For most, it’s a snap-hook.)

Sometimes all it takes is a minor adjustment to mitigate the two-way miss. In Rory McIlroy’s case, he tweaked the loft on his driver at Bay Hill to tighten things up, going from a 10.5-degree SIM2 head with the loft sleeve set to the lower setting (8.75 degrees actual loft) to a 9-degree offering (standard loft sleeve setting). The loft stamped on the head makes you believe McIlroy went down in loft when he actually added 0.25 degrees.

Graphite iron shafts are still a distant second to their steel counterparts on the PGA Tour, but thanks to the recent success from Bryson DeChambeau and Abraham Ancer, other players are warming to the idea of using something other than traditional steel in their set.

“We’re definitely starting to see a lot of buzz [around the shaft],” said Callaway Tour rep Jacob Davidson. “Guys are interested. They were probably apprehensive to test graphite in the past, but now that guys in the locker room are talking about it, others are opening up to the idea of trying it out. It’ll be interesting to see if it sticks.”

At the Arnold Palmer Invitational, Kevin Kisner (Callaway Apex Pro) and Matt Every (Callaway Apex MB 21) gave Mitsubishi’s MMT a trial run in their irons. Both players noticed better spin numbers and turf interaction with MMT. Davidson also noted the shaft “killed some vibration,” a positive that can reduce fatigue.

Maverick McNealy received the first shot at a new set of Callaway Apex blades (4-11) that are currently being called “Top Gun Proto.”

“Players keep talking about how well the 11 swings, and how well it sets up,” said Scotty Cameron Tour rep Drew Page said. “When you put it down, it really sets up square, and that’s something a lot of players are looking for these days. You don’t want to be there looking down and second guessing, is it open or closed? There’s no doubt with the 11. It just sits so perfect on the ground and is very stable throughout the entire stroke.”