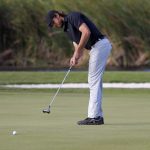 Poor putting tends to wear down the psyche of a golfer more than any other part of the game. A couple missed three footers is enough to drive golfers mad and leave scar tissue for days, weeks and even years. If there’s a broken club sitting in the garbage can by the clubhouse, chances are it’s a putter and not a driver. Putting just has that effect on golfers.

For Aaron Baddeley, though, one of the PGA Tour’s best putters of the last 20 years, putting seems to come easy. Since the PGA Tour started keeping track of Strokes Gained: Putting in 2004, Baddeley has finished in the top-10 in the category ten times, and he led the tour in 2015. His long-lasting success on the greens is nearly unmatched.

On our latest Fully Equipped podcast, Baddeley joined the show to discuss all sorts of topics, including his recent signing to True Spec Golf (an affiliate of GOLF.com’s parent company, 8AM Golf), what’s in the bag now, and what it’s like to work with world renowned golf professional Butch Harmon.

The entire interview (embedded above) is well worth a listen, but it was our discussion on putting that left a lasting impact on me. As a struggling putter myself, I was curious to get inside the mind of such a great putter like Baddeley. His approach to putting, and how he prepares, was eye opening in its simplicity.

Below, I’ve highlighted 3 major things I learned from Baddeley’s Fully Equipped appearance, and some of his trusted drills to go along with them.

So many golfers (myself included) putt in fear of missing. Baddeley’s approach is simpler, and decidedly more positive. He allows his inner athlete to take over, rather than doubt or concern.

“I just putt…I just try and hole it,” Baddeley says. “It sounds funny, but it’s like throwing a ball to first base. When you pick it up at shortstop, you’re not thinking of how to plant your feet. You’re not thinking of what position your elbow needs to be in, or when you’re going to release it…you just sort of look at where you want (the ball to go) and putt to it.”

Baddeley says that on downhill putts, he envisions the ball gently falling over the front lip of the cup, whereas on uphill putts he sees the ball going into the back of the cup. From there, he simply reacts to the speed he has in his mind. That leaves little room for doubt or negativity to creep in. Just throw the ball to the first baseman!

Drill 1: Find a putt with a good amount of break on your practice green, and place three balls down about 4-5 feet from the cup. Hit each putt with different speed; one fast, one slow, and one medium. Each putt will break differently, and over time, you’ll get comfortable controlling the speed that the ball tumbles into the hole.

Drill 2: The tee drill. This is a widely popular drill used among pros and amateurs alike, and Baddeley swears by it. To perform the drill, surround a practice hole with tees at around 5-6 feet, and go around the circle from tee-to-tee hitting putts at the cup. This helps simulate the different breaks of putts you’ll see on the course. As Baddeley says, make sure to keep the same putting routine during the drill that you use on the course. He says he gains a sense of “peace and confidence” when he gets a short putt in competition because he’s hit so many of them on the practice green during the tee drill.

2) Setup the same way every time

While far from over-analytical, Baddeley does have a system in place to make sure he sets up the same way to the ball every single time. He stresses the importance of setup in putting because, as he says, there’s no time in a 5-6 inch stroke to make adjustments like you can in the full swing. Consistency is imperative.

For Baddeley, his sweet spot is 3.5 putter head lengths. At that distance, Baddeley has his eyes over the ball in the proper spot where he can make a free-flowing stroke.

Drill: Want to find your own comfort zone? Setup to the ball with your putter where it feels most comfortable. Right before you stroke the putt, simply measure the distance from the golf ball to the end of your feet. Should things ever start going awry on the course, get back to basics and make sure you’re standing the correct distance away.

Baddeley says the very most important part of putting is aiming the face properly to your starting line. Reading the putt correctly is only half the battle.

Easier said than done, of course. Even Baddeley said he’s struggled with alignment in the past. Using a drill he learned from his swing coach Butch Harmon, Baddeley putts off of an 18-inch ruler to get himself back to square.

Drill: To perform Harmon’s ruler drill, setup a ruler about 10 feet from the hole on a dead straight putt. Make sure the stick is aimed directly at the hole, then place a golf ball directly on top of the ruler. When you setup to the ball, what do you see? Does it look like the ruler is pointing left or right of your target? If it does, hit some putts off the ruler until you get yourself properly adjusted. Once you do, now you know what “square” really feels like.

Please note that Baddeley says to find a longer ruler than 12 inches to get the most amount of feedback. To do as Baddeley does, keep the ruler in your bag so if you ever feel off, you can simply take it out and get re-calibrated.

Want to overhaul your bag for 2021? Find a fitting location near you at GOLF’s affiliate company True Spec Golf. For more on the latest gear news, check out our Fully Equipped podcast below!