Wall-to-Wall Equipment: Tony Finau’s chase to bomb it like Bryson 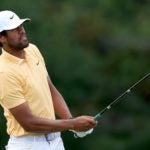 Bryson DeChambeau’s grip it and rip it mentality with the driver has caught the attention of several high-profile tour players. Tony Finau is at the top of the list.

By now you’ve likely seen the video of Finau mashing driver 383 yards — that’s carry, not total distance — if you frequent social media. Ping Tour rep Kenton Oates has seen the video. Shortly after Finau posted it to his account, Oates picked up the phone to ask the big bomber one question: Was this all-out approach something he planned to use on the course?

Finau confirmed that he not only wanted to hit the mid 190s in ball speed on a regular basis but had aspirations of getting beyond 200 mph.

“Yeah, it no doubt inspired me,” Finau told the Golf Channel’s Todd Lewis. “I don’t think what [Bryson’s] doing is rocket science, but it’s executing at that speed. Being able to see him swing that fast and hit it that straight got me thinking, for sure.”

When Oates found Finau on the practice range, he was “smoothing” the 8-degree Ping G410 Plus driver with ball speeds hovering around 196 mph. On good shots, his spin rate landed around 3,200 RPMs and sometimes reached 3,600 when caught low on the face.

Hoping to find a way to drop spin and launch to achieve more carry (and ball speed), Oates had Finau test a new G410 head with 7.25 degrees of actual loft and 5 grams of hot melt positioned near the face to lower ball flight. During testing, Finau saw his spin rate drop to 2,700 RPMs with a launch that was a half-degree lower (9 to 10 degrees) than what he was accustomed to seeing. Ball speed landed around 196-198 mph on drives where he went all out.

“I was following him out on the course and watched him carry one 340 yards,” Oates said. “That was on a hole where it goes uphill. He was just crushing the ball. It was a lot of fun to watch.”

While the numbers are impressive, Finau’s already contemplating testing another driver with less than 7 degrees of loft prior to his next start. Unlike DeChambeau — who uses a driver with 5.5 degrees of loft — Finau will likely never go below 6 degrees due to the look he prefers to see in the address position.

“There’s a fine line for him because he likes to see some face at address,” Oates said. “We’ll still probably test something with less than 7 degrees, but he’ll likely get to a point where the look might not be there. It’s all about balancing performance and what he’s accustomed to seeing.”

The new driver project produced impressive results the first week out, with Finau ranking seventh in Strokes Gained: Off-the-tee (plus-3.334) and second in driving distance (318.9 yards).

Rory McIlroy can flush it with the irons. That’s not even close to a hot take. But ever since he joined TaylorMade in 2017, his iron setup has consisted of long irons (P750 or P760) that pack forgiveness and consistency with blades (P730) offering the workability and control he needs to go flag-hunting.

The blended set he employed was fairly common by today’s Tour standards. McIlroy even went so far as to add a SIM Max hybrid earlier in the year to reap the launch benefits the club had to offer.

And then he flipped the script at the Memorial. McIlroy’s new iron setup now consists of eight P7MB blades, including the 3- and 4-iron. You have to go all the way back to 2016 — when McIlroy was on staff with Nike — to find the last time he used one version of an iron (Nike VR Pro Blade) through the bag.

It was a two-putter week for Phil Mickelson. After opening the Memorial with an older model Odyssey White Hot XG No. 9 that featured an abundance of lead tape wrapped around the hosel, the five-time major winner opted for a Versa No. 9 over the weekend. He finished the tournament ranked 69th in Stroke Gained: Putting and lost more than 3.8 shots to the field on the greens during the final round.

Quick-hitters: Hideki Matsuyama was spotted with a different Scotty Cameron Newport 2 prototype putter in a dark finish. … Sergio Garcia switched up his scoring clubs and inserted a pair of Titleist Vokey Design SM8 wedges to the bag. … Jason Day added an 18-degree TaylorMade SIM Max fairway wood to achieve a higher flight and softer landing. … Rory McIlroy cut down his TaylorMade SIM Max 3-wood from 43.25 inches to 42.5 inches for added control. … Viktor Hovland had a new set of Ping i210 irons built to handle the firm conditions at Muirfield Village. … Davis Riley won for the second time on the Korn Ferry Tour with four different Titleist iron models in the bag (T-MB, AP2, CB and MB). Riley prefers the look of the offset transition with his combo set, as well as their feel and flight.

Best golf gifts: 10 gifts to splurge on for the diehard golfer in your life