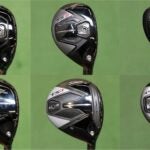 Back in October 2020, Titleist officially launched its new TSi2 and TSi3 drivers and metalwoods, and the clubs found immediate success. Not only did tour players switch in droves – 57 PGA and European Tour players switched the first week they were available – but GOLF’s own testing found big performance increases compared to previous TS models.

While the TSi2 and TSi3 products will satisfy the needs of most golfers due to their speed, forgiveness, and adjustability, some golfers have more extreme needs.

Golfers with slower swing speeds often need lighter clubs that can produce more height, distance and accuracy. For those golfers, Titleist has unveiled new TSi1 drivers, fairways and hybrids. Better players with fast swing speeds, on the other hand, sometimes need a driver that’s a spin-killer to keep the ball from ballooning. For that enviable group of golfers, and those with other unique needs, Titleist has designed a new TSi4 driver. Additionally, as hybrid lovers have been anticipating since Titleist’s October TSi release, the company has officially unveiled its new TSi2 and TSi3 hybrids.

Below, we dive deep into the technologies that make Titleist’s new TSi products different. Each of the new TSi drivers, fairways and hybrids will hit retail on February 26. In case you missed it the first time around, make sure to also check out our ClubTest review video on the TSi2 and TSi3 drivers for more information on the original TSi2 and TSi3 drivers.

The new TSi1 family of products are made for moderate swing speeds, which Titleist defines as less than 90 mph with the driver. That segment of golfers may be larger than you think; Titleist says that moderate-speed swingers include approximately 30 percent of all golfers. Titleist’s TSi1 clubs are designed specifically to help these golfers hit the ball farther, higher and straighter.

In particular, the 460cc TSi1 driver is nearly 40 grams lighter than standard, as Titleist reports. The light weight, and the reshaped head compared to the previous TS1 driver, means faster swing speeds for golfers. Also, like the TSi2 and TSi3 drivers, the TSi1 drivers have faces made from a special ATI 425 Aerospace Titanium material, which was originally used for military applications.

“With the new TSi1 driver, we focused on how to deliver even more speed than we did with the original TS1 for that player,” said Stephanie Luttrell, Titleist Director of Metalwood Development, in a press release. “We maintained the launch, spin and draw bias, while successfully accomplishing our goal of increased club and ball speed with the combination of new aerodynamic head shaping, higher inertia and moving the CG closer to face center.”

This segment of golfers also tends to struggle getting enough height on their fairway wood shots, and Titleist’s new TSi1 fairways are designed to help them out. The fairway woods weigh-in at nearly 50 grams lighter than standard, according to Titleist, and they have centers of gravity (CG) that are pushed rearward in the head to boost forgiveness and launch.

“We have seen many tour players put higher lofted fairway metals, especially 7-woods, in the bag since the introduction of the TSi line,” said Josh Talge, Vice President, Titleist Golf Club Marketing. “While the TSi1 is not a tour product, the interest in them by players at the highest level has exposed an opportunity to expand to the moderate speed player and offer higher lofted fairways (15, 18, 21 and 23 degrees), which we have never done before.”

In addition to the drivers and fairways, Titleist’s new TSi1 hybrids are designed for high launch and big forgiveness. With larger profiles than Titleist’s TSi2 and TSi3 hybrids (more on those below), the TSi1 hybrids have wider soles, low CG constructions, and they weigh 20 grams less than standard, according to Titleist.

While the TSi1 hybrids are designed for moderate swing speeds, most golfers will find what they’re looking for in the TSi2 and TSi3 hosel-adjustable hybrids.

The TSi2 hybrids – Titleist calls them “work horse” hybrids – have slightly larger shapes compared to the TSi3 for golfers who want high launch and more forgiveness.

The TSi3 hybrids, on the other hand, have more compact shapes and squarer toes that offer more iron-like control. Designed with input from Titleist’s tour staffers, the TSi3 hybrids also have SureFit CG Track adjustability systems in their soles to dial in trajectory.

“One of the key points of difference in fitting and performance between the new Titleist TSi hybrids and the competition is the level of adjustability we offer, especially in the TSi3,” Talge said. “We all stress that golfers should be custom fit for drivers and irons, so why not hybrids? The golfer may need or want to increase or decrease loft, add a degree upright or make the club flatter. Those adjustability options are available with the new TSi hybrids and we think that, in combination with outstanding performance, sets these hybrids apart.”

Adjustability and different head shape options are great, but Titleist also says the TSi2 and TSi3 hybrids have “the fastest hybrid face Titleist has ever made.”

As previously discussed, Titleist’s TSi2 and TSi3 drivers have been widely popular on the PGA Tour. You may have noticed, however, that there’s been another driver in the bags of players such as Adam Scott, Russell Henley and Richy Werenski. It’s called the TSi4, and it’s designed for ultra-low spin and high speed.

“The TSi4 fulfills the ultra-low spin product within our TSi lineup,”Luttrell said. “For those players that need aggressive spin reduction to improve their distance, we now have that product in the TSi lineup.”

To achieve the desired effects, Titleist designed the TSi4 with the lowest and most forward CG in the TSi family of drivers. Measuring 430cc, compared to the 460cc sizes in the other offerings, the TSi4 heads have small pear shapes that traditionalists prefer. They also come with ATI 425 faces for fast ball speeds, as with the TSi1, TSi2 and TSi3 drivers.

Although the TSi4 will appeal mostly to high-speed players, other golfers may find the designs beneficial, too.

“In general, high spin comes from players that either come over the top, have a steep attack angle, or are adding significant loft at impact,” Luttrell said. “So, the TSi4 is not strictly reserved towards high speed players, but absolutely dedicated towards all golfers who require spin reduction in order to improve their distance by producing a longer, more piercing ball flight.”