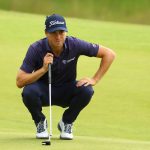 Preparing for the Open Championship usually requires players who predominantly play on the PGA Tour to get acclimated to the time change and links-style course conditions. For Justin Thomas, his prep at the Scottish Open also included getting familiar with a new Scotty Cameron Phantom X5 prototype that made its tournament debut at the Renaissance Club.

Thomas chose to keep things somewhat familiar by sticking with the same winged mallet shape he’s been using since 2017. The more noticeable change was a shift away from a small slant neck into a custom knuckle that more closely resembles the neck found on a Newport 2 — Thomas’ putter of choice until several years ago.

“JT’s had incredible success the last five years with his Futura X5.5 gamer, but had been thinking lately about experimenting with a slightly different look,” said Page. “We took the Phantom X 5 head shape he loves and gave it a Newport 2-style neck which he’s also used in the past. He tested it at a few different neck lengths and was able to find a setup that was giving him a more consistent stroke pattern with that little bit different visual and the same feel that he’s used to.”

The custom knuckle neck — which typically takes roughly a day to weld the neck, cut the shaft and sandblast the knuckle — offers slightly less toe hang than Thomas’ gamer, making it a best of both worlds option for the former major winner.

Thomas didn’t skip a beat with the new wand, dropping a 90-foot bomb early in the tournament on the way to a T8 finish.

Lucas Glover found the winner’s circle with two new pieces of gear in the bag. Working with Titleist Tour rep Jim Curran and Golf Ball R&D consultant Fordie Pitts, Glover transitioned from Pro V1x Left Dash — a ball he’d been playing since July 2019 — into the 2021 Pro V1. Glover, who won for the first time in 10 years, was sold on the ball’s improved wedge spin and overall control during testing. He finished the week 3rd in SG: Approach, 4th in SG: Tee to green and 5th in scrambling with the new ball.

“2021 Pro V1 gave Lucas the added spin he was looking for into the green, while still providing that tight, consistent flight he likes to see, especially in the wind,” Pitts said. “He was hitting all his numbers on the course Tuesday — in particular a 4-iron that flew 224 yards, which he said sealed the deal for him.”

Glover also worked with Scotty Cameron Tour rep Drew Page on an armlock version of the Select Squareback 2 in Detroit that received a few minor modifications at TPC Deere Run.

“We took the same putter he had been using, built it for the armlock and added loft,” Page said. “He had a good week with it in Detroit but came to me this week looking to add a little more loft and move to a smaller grip for more feel. We watched video of it rolling and it was perfect.”

Steph Curry and Tom Brady are two of the best in their respective sports. They also happen to play the exact same driver. As the story goes, Brady had the chance to hit Curry’s Callaway Mavrik Sub Zero “Single Diamond” driver (Fujikura Ventus Blue 7X shaft) prior to “The Match 4” and liked it so much, he had Callaway build him an exact replica.

Brady wound up driving the green on the 392-yard third hole at The Reserve at Moonlight Basin with, you guessed it, his new Callaway driver.

A putter change helped Cameron Champ get back on track at the John Deere Classic. Champ switched from a Ping Anser with a plumber’s neck into a flow neck Anser 4, in an effort to improve his setup.

During testing, Champ felt the Anser 4 made him set his hands higher at address, thus reducing the amount of rotation he was seeing during his stroke. Champ ranked T23 in SG: Putting at TPC Deere Run.

Quick-hitters: Matthew Fitzpatrick added Titleist T100 long irons (4-5) to the bag. … In search of more spin, Andrew Landry went to a Project X HZRDUS Smoke RDX Blue shaft in his Ping G425 LST driver. … Odyssey accounted for 54 percent of the putters in play at the Scottish Open, more than three times as many as the No. 2 brand. … Pat Perez switched to a Ping G425 Max driver. … Charles Howell III put a set of Titleist T100 irons (4-P) in play. … Lucas Glover started the tournament week with a Titleist TSi2 driver (TPT 15 LO shaft) but returned to his usual Srixon Z 785 (Fujikura Ventus Blue 7X shaft) over the weekend.